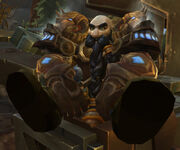 During the Fourth War, the Horde sent forces to the Ruins of Alterac to repair it as a Horde base and encountered Grumbol Grimhammer there.[1] Later, he appeared in the Faction Assaults as a rival, once again, to Usha Eyegouge. This rivalry carried over to Mechagon Island, where his forces in Grumbol's Hammers brawled with Usha's Eyegougers on the Western Spray.

I am sorry <class>, but you need to be more experienced before you can survive in Alterac Valley.

What are ye doin' here?! Get yer chatty self ta Alterac Valley, where ye're needed!

Ye think I e'er let a durned gnome tell me whatta do!?

Ya wanna fight? We got a place outside o' town where the rules aren't so... strict.

Unless ya'd rather cuddle up with the stinkn' Horde running around here instead. Is that what you like, <name>?

<Grumbol throws back his head and laughs.>

I'm not afraid of a fight. Where's the action?

Magni's beard! What a stench!