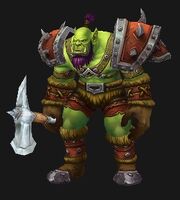 Grunt in World of Warcraft.

Grunts are the basic warriors of the Horde and the orcish clans. They are typically equipped with mighty axes and battle-worn armor.

Grunts were the first level of warrior in the service of the orc's armies. Trained for close combat, these soldiers made excellent fodder for wading through human forces. Use of the axe and shield was their specialty, and they were hearty fighters with a taste for blood.[1]

Those orcs who distinguished themselves enough in the arts of war to be trained as grunts epitomized the merciless spirit of the Horde. Equipped with mighty axes and battle-worn armor, they were prepared to fight to the death. Devoted to the Horde and to their clans, the grunt lusted for battle - wanting nothing more than to wade into the field of carnage and die a bloody death surrounded by the bodies of his fallen enemies.[2]

Veteran grunts were sometimes put at work in blacksmith shops due to their understanding of the value of strong steel.[3] Some grunts were also former raiders, degraded to being footsoldiers after their ranks were disbanded by Orgrim Doomhammer.[4]

Grunts are the first and last line of the Horde's defense. These powerful fighters arm themselves with mighty battle-axes and display all of the savagery and cunning of their race. In past generations, grunts were characterized by their depravity and brutality. But now, under the visionary leadership of Thrall, the grunts more closely resemble their savage, yet noble ancestors.[5]

Chaos Grunt and Fel Orc Grunt are red skinned orc grunts that are campaign only units. 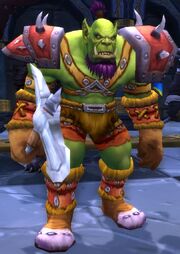 The Orc Grunt chess piece in World of Warcraft. 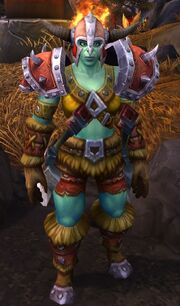 A Warspear Grunt with a horned helmet. 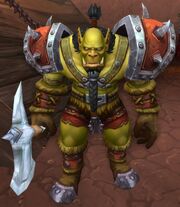 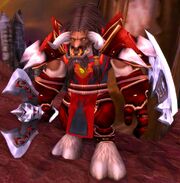 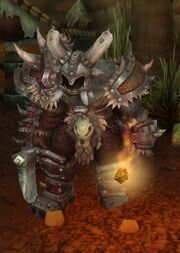 Hearthstone and Heroes of the Storm