Gruul the Dragonkiller was the gronn overlord of the ogres of Outland, ruling with an iron fist. He earned his "nom de guerre" (and the emnity of Sabellian) after slaughtering many members of the black dragonflight who had come to Outland in order to aid the Horde of Draenor. Gruul was worshiped as a deity by the ogres of the Blade's Edge Mountains, and his powerful sons ravaged both the Blade's Edge Mountains and the plains of Nagrand. Gruul's unparalleled strength and experience in battle would have posed a serious threat if he ever chose to attack the Horde or Alliance forces in Outland.[2] Gruul was also allied with the Illidari, though to what extent is unclear.[1]

Gruul far surpassed any others of his species in strength and cunning, and once lorded over a small number of ogres and gronn in Gorgrond. After the fall of Shattrath City, the Old Horde sought to scour the rest of Draenor's races. The Thunderlord clan reveled in the slaughter of their ancient enemies: the gronn, ogron, magnaron, and ogres. Yet Gruul was one of the few gronn to escape the Horde's onslaught. From his lair in the mountains, he fended off numerous Thunderlord assaults. Casualties grew so great that the clan's chieftain Fenris Wolfbrother backed off.[3] 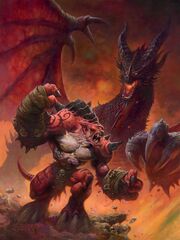 On Azeroth, the black dragonflight has long been hated and hunted by both mortals and other dragons. This is not so on Draenor. Indeed, dragons are not a species native to Draenor. When the infamous Dragon Aspect, Deathwing, discovered the Dark Portal and Draenor, he felt sure that few of Draenor's denizens would dare challenge the dragons. Thus, it was during the Second War that he traveled to Draenor and hid clutches of his eggs all over the world. Returning to Azeroth, he left behind only a small number of drakes to guard the eggs.

However, Deathwing had made a serious miscalculation by leaving some of his eggs in Gorgrond and Frostfire Ridge. The gronn living in the area were not pleased by this potential challenge to their sovereignty. Tension soon erupted into conflict. Led by the mighty Gruul, the gronn and their ogre servants proved too much for the outnumbered black dragon guardians to handle. Nearly every dragon was torn from the sky by the diabolic incantations of the Bladespire clan and then impaled by Gruul on the stone spires of the mountains. The bones still scattered about Dragons' End serve as a stark reminder of the black dragons' defeat.

Gruul is the father of the seven gronn lords of the ogres, and the most powerful of them. Although he seems to be nothing but a cruel brute, he possesses intelligence. In the events unfolded during the Invasion of Draenor — shortly after Deathwing invaded his home — Gruul was met by the lost heroes of the Second War: Khadgar, Turalyon, and Alleria Windrunner. They were after the Skull of Gul'dan which Deathwing possessed. After that, Gruul and his ogre minions, along with the heroes, challenged Deathwing from his perch in Blade's Edge Mountains — killing his eggs and impaling his lesser black drakes on the mountain spikes. Infuriated by this act, Deathwing landed on top of them and attacked Gruul. Although clearly no match for the mad Aspect's power, Gruul was saved by Khadgar's miraculous spell when he disassembled some of the adamantium plates that were holding Deathwing's unstable body together resulting in Deathwing's retreat.[4] This led to a clear devastation for the black dragonflight in Outland. The results can still be seen as impaled black dragon corpses all over Blade's Edge Mountains. This earned him the title the Dragonkiller.[5] 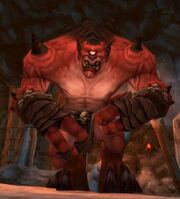 Gruul in his lair.

By this time, Gruul's "small amount" of ogres he ruled during the Horde's rise seems to have expanded, now including clans that were once among the Gorian Empire such as the Bladespire clan. Gruul is the final boss of Gruul's Lair in the Blade's Edge Mountains. He drops Tier 4 Legs tokens. He is the father of seven Gronn: Goc, Gorgrom the Dragon-Eater, Grulloc, Maggoc, Slaag, Skulloc Soulgrinder, and Durn the Hungerer.

[70R] The Cudgel of Kar'desh. This quest requires two signets. One of which, the

[Earthen Signet], drops directly from Gruul. The other, the

[Blazing Signet], drops from Nightbane in Karazhan. Serpentshrine Cavern no longer requires attunement as of June 20, 2007.

Lady Malande reported Gruul's death to Illidan Stormrage one day before the siege of the Black Temple.[1]