Gruul the Dragonkiller is the final boss in his lair.

Players will have ~10 minutes to defeat Gruul (he has roughly 3.4 million hp), otherwise the buff stacks will annihilate the tank. At 16+ grows, Hurtful Strike can theoretically one shot your OT, making it vital to keep them topped off after every strike. The fight is basically a dps race, with an emphasis on raid survival.

A high-stamina/high-DPS raid is favored for this encounter. Melee DPS is at a disadvantage, as Cave-ins often spawn on top of Gruul, and they may have to run out repeatedly in preparation for his Ground Stomp.

The focus is primarily on the healers keeping several "tanks" alive, or in the case of dps, simply staying alive. Cave Ins, while becoming increasingly deadly, only tick after 3 seconds, allowing the quick-footed to exit without damage. Shatter positioning is very important, as too many deaths quickly lead to lethally low DPS.

This is one of the few fights where Main Tank death is not an automatic wipe. Tanking duties simply shift down the ladder of offtanks, with the previous Hurtful Strike soaker becoming the MT.

The main priority for the healers should be to keep track of the silence and have 4/5 healers hit HoTs on the tank to stay alive through the silence. This takes some timing and practice.

If a Paladin in your raid has Improved Concentration Aura, it may help to place that person in a group composed of healers; the

[Silence] duration mechanic can save your raid on

[Reverberation] at a high Growth stacks, by reducing the amount of time they are silenced. It's also helpful for resto shaman to have the silence duration reduction talent, as there will be a lot of moving during the fight and Gruul's room is very large.

[Cloak of Shadows] to remove the "Gronn Lords Grasp" movement debuff. Likewise, Paladins can also use

[Divine Shield] to remove the movement debuff, and mages ability Ice Block remove the debuff as well, but note this does NOT prevent any damage being done because of Gronn Lords Grasp. Druids can shapeshift, but the debuff will reappear 1–2 seconds after.

The Ground Slam knockback does not properly function if the player is on the rocks around the outer ledges of the room. Players there will be pushed only a short distance, if at all.

Shatter will affect targets beyond line of sight, however players can wedge themselves into niches along the outside to avoid being launched inward toward Gruul.

If you land quite some distance from Gruul, you are advised to run straight toward the outer wall, or toward the wall at an angle away from someone if you land near them. If you land between closer to Gruul than you are to the wall, and you can see other characters between you and the wall, move a bit toward the wall but be sure you keep your distance from those who are closer, and watch for tanks who will be moving toward Gruul. The key to a raid surviving Shatter is to trust those behind you to not come too close and kill you, and for those behind others to maintain their distance from those ahead of them. However, because the result of Ground Slam is completely dependent on chance, sometimes even a well-prepared raid will get an unlucky Ground Slam/Shatter combo that leads to a wipe.

It is common for many guilds attempting to defeat Gruul to lose their MT around 1/4 health on Gruul. This is usually because the designated healers for the group are running low on mana and/or are not properly getting HoT rotations in before the silence. This fight is important for healers to have high mp5 to last a full 8 minutes. Healers should not be asking for

[Innervate] any sooner than 5–6 minutes into the fight.

If your tank dies a lot during the AoE silence...

If your group consists of 3 tanks (which it should because of High King), you designate a main tank (tanking Gruul of course), a Hurtful Strike tank, and a third tank that is also building up aggro (just in case one of the other tanks die). This third tank should

[Intervene] the main tank to take a hit once during the AoE silence so the healers don't have to worry about the main tank dying due to lack of heals. All healers must have HoTs ticking at all times during silence. Priests should have high Mp5 stacked and not require Innervates (however, non-resto druids should still innervate healers at low mana and/or when they call out for it) until the very end, if at all.

Raid-wise you will need an average of 6666.67 DPS to kill Gruul before he reaches 17 Grows (at which point the tank is risking getting killed in one hit), or an average of 266.67 DPS per raid member (assuming a full group of 25).

Assuming your raid has 3 tanks doing about 150 DPS each and 5 healers doing 0 dps, the remaining 17 DPS classes in the raid will need to average about 365 DPS on Gruul.

--Practical Suggestion—Note: From practical experience, 17 grows is unrealistic unless you are lucky, or your tanks are overgeared. A group should try to DPS him down by grow 13. A typical group will go with 6 to 7 healers as well.

Calculation: Gruul has 3.8 million hit points. End of grow 13 equates to 14 *30 seconds = 420 seconds. Assuming 6 healers, 3 tanks doing 150 DPS, and no deaths due to Ground Slam and Cave-in, the average raid DPS for the DPS group (16) is 8,598 DPS, or 537 dps per DPS player. A reasonable portion of the raid is spent moving and recovering from Ground slam so this is a minimum. 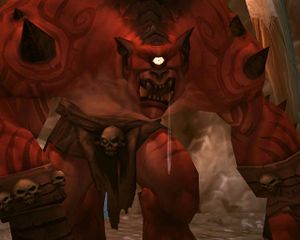 World of Strats Tactics and videos