Not to be confused with Gryphon Rider (character boost).

Gryphon riders (also spelled gryphonrider and gryphon-riders)[1] are mounted warriors who serve as air support in the armies of the Alliance's nations. Most of them are dwarves of the Wildhammer clan, known to wield deadly stormhammers and to have a special bond with their gryphon mounts, but recently Ironforge dwarves and humans alike have started deploying gryphon riders of their own.

A group of gryphon riders is called a gryphon wing.[2] They are often under the guidance of a wing commander, which is sometimes stationed on the ground near their target area.[3]

From the ominous and foreboding peaks of Northeron came the dwarven gryphon riders. Mounted upon their legendary beasts and wielding the mystic stormhammers forged deep within the secret chambers of their aviaries, these feral dwarves feared no enemy - and relied upon no friend. They had allied themselves only with the elves of Quel'Thalas, distrusting both their dwarven cousins and the humans alike. When the call to battle was sounded, however, they could be counted upon to fight alongside any who opposed the Horde.[4]

The daring dwarves of the Wildhammer clan had responded once again to the call and brought the mighty gryphons of the Aerie Peaks to aid the Alliance in its time of need. Armed with their trusty, lightning-powered stormhammers, the fearless wilddwarves sought to keep the skies of Lordaeron free from enemy forces. The proud gryphons shared their riders' implacable resolve and stood as noble symbols of the Alliance's fortitude.[5]

Gryphon riders are the air power of the Alliance, the men who fly through the air and risk their lives in an aerial blitzkrieg. To a man (or woman), they describe their job as the most exhilarating in the Alliance. Wearing a breastplate and a jaunty leather cap, the stout, friendly Wildhammer dwarf stays close to his steed. In combat, the gryphon rider's tactics are surprisingly similar to those of normal cavalry; they charge in, strike a blow, and get out before the opponent can launch a counterattack. As one gryphon rider puts it: "If they've got no spellcasters or missile troops, battle's a picnic." They usually use an axe as a weapon, and they are never without their stormhammers.[6]

Gryphon riders are usually of the windrider and windwarrior classes.

Though gryphon rider characters already existed in the original release of World of Warcraft, it is only with the The Burning Crusade expansion pack that flying mounts and the mechanics for flying NPCs were added. Special town guards able to counter flying adventurers also had to be created. In Outland, all of the Alliance villages were protected by the same Gryphon Rider Guards from the Wildhammer clan.

The Roughnecks are human gryphon tamers and riders on Kul Tiras that are taught and led by Boss Tak, a Wildhammer dwarf. The Roughnecks provide all gryphon mounts for Kul Tiras.[7] 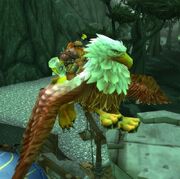 A Gryphon Rider Guard in Outland.