From Wowpedia
(Redirected from Gryphon roost)
Jump to: navigation, search 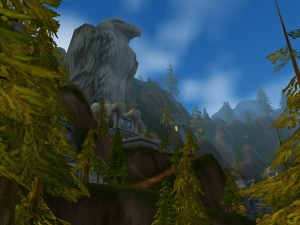 Aerie Peak in the Hinterlands.

Gryphon aviaries contain aeries where gryphons are raised and trained. Later the functionalities of the building were extended to also include thalassian dragonhawks.

An homage to the legendary beasts housed within, the colossal aspect of the gryphon aviary loomed over all that it surveyed. Hewn from solid rock by the dwarves of Northeron, their aviary inspired dread in the hearts of whomsoever these gryphon riders called foe. Deep inside these massive structures were the gryphon aeries and the dwarven workshops where saddle and harness were crafted.

Most sacred to the dwarves was the enchanted forge that lied at the heart of each aviary. It was here that the magical weapons known as stormhammers were fashioned. A stormhammer, when thrown, stroke with the fury of lightning and the force of thunder. This destructive weapon, combined with the indomitable spirit of the gryphon riders, justified their position as masters of the skies.[1]

The greatest achievement to come from the alliance of dwarves and humans is quite possibly the taming and training of the mighty, noble gryphons. Following years of failed attempts, dwarven riders finally succeeded in gaining the trust of the aloof gryphons. Together with the humans, dwarven riders gave the greatest care, providing lodgings that would most closely resemble the gryphons' aeries among Lordaeron's Aerie Peaks.[2]

The Aviary helped the high elves to fend off Arthas and the Scourge as he tried to attack their capital of Silvermoon City and Quel'Thalas in Warcraft III: Reign of Chaos by serving as a point for training units. However, the Aviary couldn't be built by the high elf worker unit likely due to the limited ability of the map editor prior to the Warcraft III: The Frozen Throne expansion. With the addition of The Frozen Throne expansion's map editor, it is possible to make additional groups with building orders.

The aviary also helped the blood elves and Kael'thas during the Curse of the Blood Elves campaign in The Frozen Throne. This aviary produced unique blood elven-only units.

The Isle of Quel'Danas is the refuge of the blood elf dragonhawks. It is home to the aeries where the dragonhawks and giant eagles originated and are bred for the elite windriders. Aquel'Luer'Thala is the blood elf in charge of the units stationed on the island.[3]

One gryphon aviary is still left standing: the Wildhammer clan capital of Aerie Peak.[4] As indicated by the Phoenix-Hawk Hatchlings in Tempest Keep the blood elves are still breeding dragonhawks but no building dedicated to this task can be seen in-game.

Other places also have generic aviaries, such as the Gryphon Roost in Stormwind City and one in Drak'Tharon Keep who is dedicated to raising bats. The Twilight's Hammer has been seen capturing wyverns as the Twilight Aerie in the Thousand Needles. The People of the Sky in Pandaria train hawks at the Secret Aerie.

Splinterbark Roost is a wild gryphon roost in Tiragarde Sound.

In the canceled Warcraft Adventures, one scene would have had Thrall interacting with Wildhammer clan dwarves near an aviary northeast of Tyr's Hand. Thrall himself had to transform into a dwarf in order to not be attacked.

A ballista and a cannon tower were nearby, and the aviary contained a forge and an harnesses and shields workshop as well as a gryphon roost.