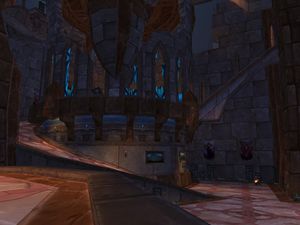 The Guardian's Library was an enormous repository of arcane knowledge held by Medivh deep inside his tower of Karazhan. It is likely that this was the library that Khadgar - Medivh's apprentice - had to organize in The Last Guardian, though how he was able to accomplish such a monumental task himself, no one is sure. Many in the Kirin Tor of Dalaran, particularly the archmage Kel'Thuzad, were especially interested in gaining access to the Guardian's Library, and were dismayed when Karazhan was sealed off from the rest of the world.

This huge room contains thousands of books in varied conditions - some kept neatly on the shelves, some scattered across the floor or on tables and chairs, and some priceless tomes were even piled up and used for bonfires. The ceiling of the room has broken out, and huge chunks of rock hang suspended in the air, eternally resisting the call of gravity. This is the location of the Shade of Aran, and also grants further access to the top of the tower and its last bosses. Kamsis the conjurer, Gradav the warlock and Wravien the mage can also be found in the library.

Khadgar would later refer to this library as his.[1]