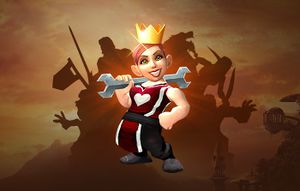 They can take up to 72 hours to complete.

The realm transfer option allows the user to transfer the guild master character to a different realm. It costs $35.

The faction change option allows the user to switch to the opposing faction on the same realm. It costs $40.

The name change option allows the user to change the name of the guild. It costs $20 or free with one of the two above.

If they meet the requirements, guild members can purchase a Character Transfer to follow the guild to its new server. After the transfer, they will automatically rejoin the guild and restore their guild reputation. This process clears the Guild Activity feed. You can also use a Free Character Migration (if available) to rejoin the guild if the transfer didn't include a faction change.

If a member transfers before the guild does or quits the placeholder guild, they will not automatically rejoin the guild.