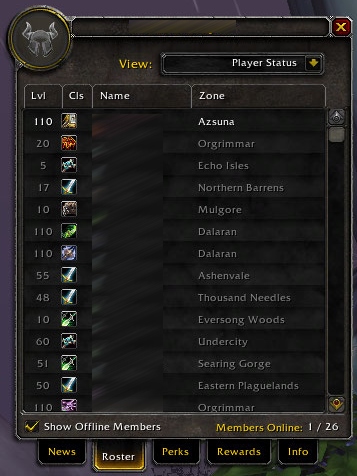 The Guild list is the window that provides detailed information for the current guild that the player is in. If the player is in no guild, they will instead have access to the Guild Finder.

With Battle for Azeroth, this window was replaced by the Guild & Communities but can still be accessed by the /guildroster command.

The Guild List is located in the third pane and the third tab at the bottom left of the initial Socials window. It lists players in your guild that you can track in the game. When you click the Guild tab, it becomes the Guild list window.

If you are not a member of a guild, the Guild tab will be gray.

You can access the Guild list from the Social button (looks like a speech bubble with an exclamation point "!"; default key shortcut of O) in the middle section of the command bar and then click the Guild tab at the bottom.

Most of the Guild list pane consists of the list of guild members, each entry showing the following info in Show Guild Status mode:

Above the list is a Show Offline Members checkbox that is checked by default.

At the bottom of the list the number of people found is shown like this: # Guild Members (# Online)

At the bottom, the Guild list pane also has a Guild Message of the Day, several buttons and a Show Guild Status/Show Player Status toggle.

The buttons at the bottom:

The other panes accessible from the Guild list window:

This checkbox in the Guild Pane toggles the display of Guild members that are offline in the Members list.

A gold right pointing triangle (►) indicates a dropdown menu for changing the way info is listed for guild members.

When a member entry is selected, a window slides out to the right with specific member info.

This ⇑ button promotes a guild member a single rank and can only be used by those of sufficient rank.

This ⇓ button demotes a guild member a single rank and can only be used by those of sufficient rank.

Click on this area to edit the note, if you have privileges to do so. This feature allows high ranked Guild members to leave notes about members so they can be reviewed later. For example, players real name, professions, any thing that is not easily remembered.

The public note is limited to 31 characters.

This note typically can be viewed by all members of the guild.

Click on this area to edit the note, if you have privileges to do so. This feature allows high ranked Guild members to leave notes about members so they can be reviewed later. For example, players real name, professions, any thing that is not easily remembered.

The officer note is limited to 31 characters.

This note can be only be viewed by those ranks given the privilege (typically officers and above).

This button removes a guild member from the guild and can only be used by those of sufficient rank.

This button sends a group invite to the selected person in the guild member list and can be used by any member of the guild.

Guild Message of the Day

Clicking anyway in the space marked for this (if of rank to edit) will open a small window and allow you to set a new or replace an existing message that all guild members will see in their chat window when they first log on.

This button opens a small window to the right of the guild list in which (those allowed to edit it) information can be placed.

At the bottom of this window is a button labeled Log.

This button opens a larger window, replacing the guild information window, with logs of players that have either joined the guild, been promoted/demoted, and leave or kicked. This log will also show which player did the actions.

This button opens a dialog box in which a character's name can be typed and subsequently invited to the guild and can only be used by those of sufficient rank.

This button allows the guild leader to change the privileges of members of lower ranks, like, the ability to chat or the ability to promote and demote others.

The Guild list was originally accessible from the Social window.