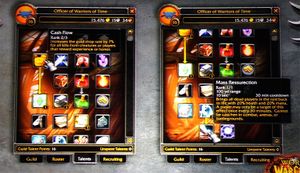 A preview of guild talents from BlizzCon.

Guild talents was a system planned to be introduced into World of Warcraft, but was scrapped before beta testing finished and was later replaced by Guild Perks, an automatic reward system for guilds. Guild talents were designed to encourage people to group together with friends to complete tasks, or even a reason to place alts into the player's guild. It operated similarly to how the character talent system worked, where every level the guild gained, the guild master could spend the points in the guild talent tree.