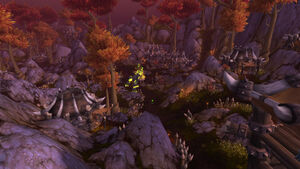 Gul'rok is a large orc village found in southwestern Talador where the Shadow Council is preparing for another assault on Auchindoun.