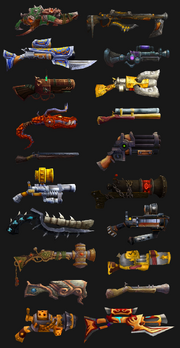 Different guns in World of Warcraft. Most guns will look rather mundane until level 60+. For each gun's name, click this image.

Guns are long-ranged weapons that use an explosive charge (in a similar manner to the black powder charges used by real-world flintlock weaponry) to propel a bullet. They are similar to bows and crossbows in use; all three use the shooting skill and related hunter skills. Character stats are applied the same way for each type, although the item stats will be different for each type.

Guns could also be found in the hand of humans. Pierce's Pistols was a shop in Stratholme before the war started, and the Gilneans were known for using pistols as well.

There are several ways to acquire a gun. Like all other weapons and armor, they can be:

There are also different ways to improve your gun:

Different things related to guns have changed since World of Warcraft began:

Before Patch 4.0.1, only Dwarf and Tauren hunters started with the gun skill. All other hunters, rogues and warriors had to learn the gun skill from trainers (see weapon trainers for details).

Dwarves have a racial trait that improves their ability to use guns - Gun Specialization: Increase Gun Critical Hit chance by 1%

Prior to patch 4.0.1, players also required bullets (an item type) to fire their guns. The patch removed the need for ammunition, which also removed arrows from bows and crossbows. Now, guns will endlessly fire and only stop firing when they break.

An Ammo Pouch was previously a type of bag-item which held only bullets. Bullets could be stored both in ammo pouches or in regular bags, but the pouches usually had more inventory slots than regular bags. With the removal of ammunition in patch 4.0.1, ammo pouches were also removed from the game (they were no longer craftable, and any existing ones were converted into normal bags).

Firearms are a relatively new dwarven invention. Despite the dangers of dealing with volatile explosives, dwarves are fascinated by the possibilities. Dwarven gunmakers constantly tinker with the guns they craft, trying out new designs and upgrades, naming and decorating their weapons.[2]

This basic firearm deals damage to anyone in a 5-foot wide path beyond that distance, out to maximum range. It holds a single shot and thereafter it is required to reload for another shot.[3]

A flintlock pistol is powerful but inaccurate, not so much a small version of the long rifle as it is like firing a bomb though a short tube. It holds a single shot and thereafter it is required to reload for another shot.[4]

The king of small arms, a long rifle is nearly as long as a dwarf is tall. Thanks to the innovative barrel design, a skilled sharpshooter can use the long rifle to knock an apple of an orc’s head from nearly half a mile away – assuming the rifleman can resist the urge to shoot the orc instead. The long rifle holds a single shot and thereafter it is required to reload for another shot.[5]

Outlaw rogues have a ability

[Pistol Shot] where they draw a concealed pistol and fire a quick shot at an enemy.