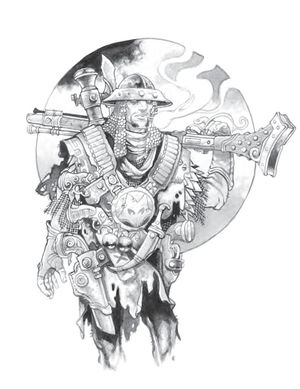 The gunman is a knight on the cutting edge of weapons development. He takes the newest technological inventions, and through a combination of innate skill and careful study, pushes them beyond the limits their creators imagined. While some warriors favor the sword or the axe or the bow, the gunman favors guns - pistols, rifles, blunderbusses, he is adept at them all. He is capable of performing amazing stunts with his firearms that leave others staring with wide eyes.

A typical gunman carries several weapons — almost all of them firearms. A long rifle and blunderbuss are slung across his back. Pistols rest in holsters on his hips, at his back, on his shins, and beneath his arms (and in several other secret places). Bandoliers hold ammunition and gunpowder. Say the word and pistols leap into his hands, blazing fusillade of death.

Gunmen claim that their abilities are purely the result of their skill, training and natural ability. Their accuracy and quickness are impressive, but not based on magical enhancement or any sort of divine inspiration. However, gunmen are hard-pressed to say how their training makes the power of magic weapons cling to their hands, or how they are able to draw and fire over a dozen pistols in the space of a few seconds.

Many gunmen are show-offs, prone to taking shots that are excessively difficult for no other reason than to display their skills. A stunt shot is such a shot. A stunt shot can take a variety of forms: behind the back, between the legs, while looking at the target in a mirror, while reading a book, tossing a pistol from hand to hand before the shot, spinning a rifle before the shot, dropping the firearm then kicking it back into one's hand, tossing a coin spinning before it strikes the target, firing from the hip, and similar displays of amazing marksmanship. A gunman can elect to make any attack with a firearm a stunt shot.

Gunmen have the peculiar trait of creating deep, personal connections with their weapons. Some joke (or complain) that the gunmen love their weapons more than their spouses or children - and this claim is not far from the truth. Declaring a specific firearm to be a special gun involves an unofficial, hour-long ceremony in which the gunman cleans the gun and creates an attachment to it. The gunmen can only have one special gun at a time.

Gunmen gain a supernatural ability, which they call pistol swap, allowing them to draw, fire and reholster any number of pistols over and over. In addition, the magic of an enchanted pistol clings to the gunman's hands and empowers the other pistols he fires. Some claim this feat occurs because the gunman's hands move so fast that the enchantments do not have time to leave them, and indeed some gunman's hands glow with colored light as they trade pistols, the light increasing in intensity as the gunman draws more and more pistols. When the gunman performs a pistol swap, the first pistol he fires transfers its magic properties to his hand. All subsequent pistols he draws and fires with the same hand bear the magical properties identical to the first pistol. The magic clings to only the hand that fired the pistol. If the gunman fights with a pistol in each hand, each hand retains different magic.[1]

Gunmen in the world

Gunmen are most common among the Ironforge dwarves, as the dwarves have a reputation as snipers and riflemen. Some credit the dwarves with the invention of the firearm, and Ironforge is proud of its gun-toting warriors. Many humans and gnomes also take on the mantle of the gunman, using Ironforge or homemade weapons to annihilate their foes. Night elves prefer the bow, citing its faster reload time and reliability — but those who have seen gunmen in action have cause to doubt claims of the bows' superiority. Furbolgs and Wildhammer dwarves avoid firearms, some seeing them as an affront to nature.[2]

Gunmen are rare in the Horde, but not unheard of. Most members of the Horde prefer melee combat to ranged, and those individuals who focus on ranged attacks favor thrown weapons or mighty bows — something to which they can apply some strength. Still, the power of the gun and the skill of the gunman cannot be denied, and a few members of the Horde — most among the Forsaken — are notable gunmen.[3]