For his past alternate timeline self in Warlords of Draenor, see Gurtogg Bloodboil (alternate universe) and Hellfire High Council.
"Bloodboil" redirects here. For the death knight ability, see 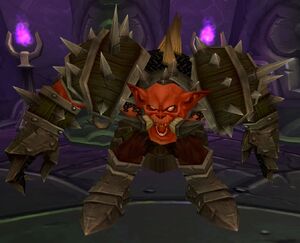 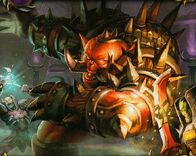 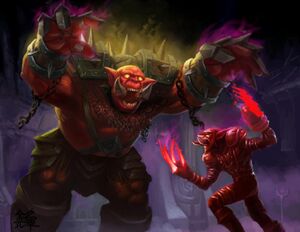 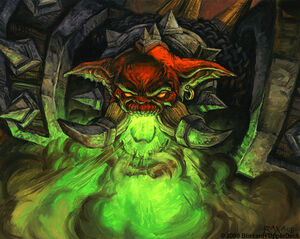 Gurtogg Bloodboil is a dire orc boss in Black Temple. The fight is a battle for survival combined with a tough healer gear check. Depending on the relative gear levels between healers and damage dealers, Bloodboil is usually killed fifth or sixth, and is a prerequisite for gaining access to Mother Shahraz.

As the fight progresses, the Gurtogg swaps between two modes that determine which abilities he uses. In one mode, he afflicts distant targets with deadly maladies, while in the other he fixates on a random player with his full might.

The fight has two alternating phases in a 90 seconds cycle. During the 60 seconds of Phase 1 the bloodboil debuff is dealt out and the tanks take a stacking debuff. Right after the fifth set of bloodboil debuffs, Gurtogg and one random raid member receive Fel Rage, which starts Phase 2. After 30 seconds Fel Rage wears off and Phase 1 starts again.

The encounter can be reset by running up the ramp, through the next room and up the stairs on the back of that room.

Because the enrage timer is rather long trading DPS for extra healing is feasible.

The fight is extremely healing intensive, even more so than High Warlord Naj'entus - healers should wear their best endurance gear. Each raid member should have a

[Healthstone], all raid members should have a few health or rejuvenation potions. No special resistance gear is required.

Most raids fight him on the ramp leading down to his place. The melee group stands on the right wall (when facing the boss), tanks with their backs to the wall, everybody else sets up on the ramp near the line drawn on the floor at the left wall. Three groups of five people each need to be pre-designated as Bloodboil (BB) soakers. The first of these groups sets up beyond the line with their backs to the left wall.

[Misdirection] pull, the first tank takes him. The other tanks should do their best to build as much threat as possible, all other raid members must be extra careful to stay below all three tanks on the aggro list.

Every time Gurtogg deals BB, the five BB soakers who just got it must move forward over the line, and the next group of five must move back to the wall, in order to take the next BB. The three groups need to keep up this rotation until five sets of BBs have been dealt. For new raids it's a good idea to practise this rotation prior to the pull. No raid member should ever take a double BB, because that's very hard to heal through.

One method to organize the rotation is to designate three groups, and give one member of each group a raid mark. After each BB, the raid leader calls out the icon which is due next. Two of the groups have to take two sets of BB each, one group takes only one. Raid members with low total health, usually Mages or Priests, should be in that third group.

Three healers should concentrate on healing through the BB damage. 1-2 healers should be on the off-tanks, and the rest on the current MT. As usual in situations with lots of distributed damage,

[Circle of Healing] are the spells of choice.

The Acidic Wound stack can grow to dangerous levels, at 20 debuffs for example, the tank takes 5k damage per tick and has 10k less armor. If it gets too much, the tank must drop aggro (

[Misdirection] to one of the OTs is helpful here) and move to Gurtoggs back, avoiding Arcing Smash for 60 seconds until the debuff stack wears off. During that time, the tank must continue building as much hate as possible. Paladins can bubble out of the debuff stack (which temporarily removes him from the threat list).

All three tanks must be clearly aware of each others threat levels and current Acidic Wound stack. In the ideal case, the three tanks are closely together on the hate list and can easily take aggro from each other. In order to build rage the OTs can take an Arcing Smash now and then on purpose. A small stack of Acidic Wounds helps rage generation.

The third tank is needed for Disorient. If one tank is on Acidic Wound cooldown and the current MT gets Disoriented, the third tank must take over.

Stacking avoidance gear can be feasible, because all of Gurtogg's abilities can be avoided. The problem in that case is that the aggro-reducing abilities are avoided too, this can lead to the MT running far ahead on the hate list. The MT may have to stop his attacks entirely, or

[Hand of Protection] can be used.

The transition to Fel Rage (FR) after the fifth BB is the most healing intensive moment in the fight. 15 raid members have BB, and one person gets FR, needing a lot of attention from the healers, while the tanks still have the DoT stacks from Acidic Wounds. All main tank healers must immediately switch to the FR target, while the raid healers must do their best keeping the BB targets up. At the same time, the raid must spread out to avoid too much damage from the Acid Geyser. It's a good idea to start repositioning after the fourth BB, but be careful that the designated BB soakers remain the raid members furthest away from Gurtogg. The melee damage dealers should also move away from him, to avoid taking damage from Arcing Smash when he turns around to face the FR target.

At the start of Phase 2, Gurtogg casts Acid Geyser together with FR on a random raid member and quickly runs to that person. The FR target should not move, and the raid should regroup so that nobody is hit by Gurtoggs frontal cone attacks.

The toughest job during these 30 seconds is to keep the FR target up. Cloth classes take normal attacks for ~13k (up to 20k crushing), and nothing prevents two (or more) crushing blows in a row. If the FR target can heal, he should do a lot of self-healing (since FR increases healing done by 100%). All non-healing capable classes should use at least a

[Super Healing Potion] and a

[Healthstone], and try to reduce their damage taken as much as possible.

If the FR target dies, Gurtogg returns to the normal aggro list (usually to a tank). Since during Phase 2 Gurtoggs damage output is substantially higher than during Phase 1, the tank should use all means available to increase his survivability (e.g.

[Shield Wall]). It is in the raid's best interest not to let the FR target die, as with the extra HP and armor, even mages are better suited to take Gurtogg's attacks than the tanks are.

Damage dealers should make sure they have the Insignificance buff, and then go all-out during this phase, using all trinkets and cooldowns (like

Generally, FR targets must immediately use all damage-reducing or health enhancing abilities they have. Damage dealers and tanks should switch to their most defensive setup. Classes able to use a shield should equip one. Pure healing builds should exclusively spam heal themselves (this allows the other healers to regain some mana). DPS hybrids able to heal should start out spam healing themselves. If the raid healers have covered up and the situation feels comfortable, hybrids may start do DPS, but must be ready to immediately resume self healing if their health drops below 50%.

Some raids fight Gurtogg at the waterfalls right in front of his initial position. The tanks line up at the right waterfall, the raid stands near the trough of the left waterfall, with the BB soakers in the trough.

Another alternative is to tank him on the wall behind his initial position. This gives the raid a lot of space to spread out to minimize the damage from Acit Geyser, but has the disadvantage that wipe recovery is much more difficult.

It's possible to manage this fight with only two tanks. This requires them both to have very good avoidance gear.

Gurtogg is a DPS race with a twist when soloing; since the player is the only possible target for Bloodboil, it will progressively stack on him/her to the point of doing several thousand damage per second after a couple of minutes. This is potentially fatal even to a well-geared level 90, so it is important to blow all cooldowns and maximize DPS to kill Gurtogg before this happens.

Aggro
Horde will... crush you.