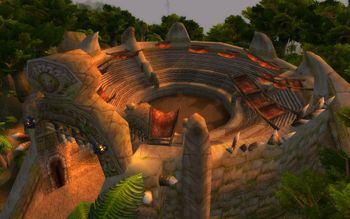 The Gurubashi Arena from the air.

The Gurubashi Arena (or the Great Arena)[citation needed]  is located in the northwestern section of the Cape of Stranglethorn, just north of Booty Bay. The Arena is an old relic of the mighty Gurubashi Empire, which once controlled vast tracts of land in the southern regions of the Eastern Kingdoms. 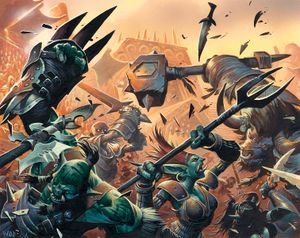 The Arena in the TCG.

The sub-region "Gurubashi Arena" covers a wide area around the arena itself. Within the actual arena, the stands and that area is a contested area not technically part of Cape of Stranglethorn called The Great Arena, but in the actual ring PvA is enabled; players may attack or be attacked by any players from either faction, except those within your party.

The arena is still in use for the Gurubashi Arena Booty Run. This arena was built by Gurubashi Empire, but endured the long ages from its fall. In these times, it is often used by pirates for entertainment: Every 3 hours starting from midnight, the pirate captain places a chest with some precious booty into the middle of arena and the crew is then entertained by the bloody battle that occurs. Any adventurer can join the battle! A universal PvP flag is enabled when you enter the floor of the arena.

The Bloodsail Pirates have a penchant for illicit after-hours activities, especially those involving mass combat and treasure. To see that his crew has its nightly fill of extracurricular entertainment, a lone pirate captain will drop a chest in the center of the Arena starting at midnight, and again every three hours at 3 a.m. 6 a.m. 9 a.m. 12 p.m. 3 p.m. 6 p.m. 9 p.m. and back to midnight the chest drops. Be the first to get to the chest and loot it - while fighting off everyone else trying to do the same - and you'll reap the reward it holds. Of course, the arena is a PvA area, so there might be other players who are trying to open it first.[1] 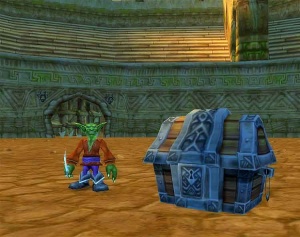 The pirate captain with his chest.

[Greater Mana Potion] and Mana Potions. Rare as well as uncommon equipment can also be found inside the chest. Some notable equipment exclusive to the treasure chest are:

In addition, through the quests

[Arena Grand Master] can be obtained. Adventurers must hand in 12 Arena Masters to Short John Mithril inside the arena to obtain the rare trinket.

[Arena Grand Master] and the

[Arena Master] are Bind on Pickup, and the Arena Master requires level 35 to use.

You can get the achievements 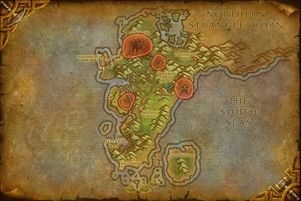 The area surrounding the Gurubashi Arena is a troll archaeology dig site. Note that to date, no artifact fragments have been found within the arena itself. It seems likely that arena spectators over the centuries have made off with what the janitors left behind. 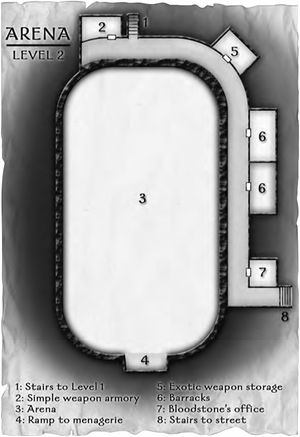 The Arena is one of the few places you can visit in Stranglethorn Vale and not expect to be immediately captured and killed. The ancient Gurubashi trolls built a huge gladiatorial arena many years ago, and it stands in ruins now — though the remaining Gurubashi still hold games within the building. Some of the participants are volunteers, and some are captured travelers or adventurers who were sold to the Arena by other troll tribes. The more well-known gladiators are very popular, and much can be won and lost (including your life) in gambling over these games.

While the Arena is relatively safe compared to the other areas of Stranglethorn Vale (uncommon races such as humans, dwarves or high elves will not be immediately snared and eaten), it is not a friendly place. Desperate people will cut your throat or your purse to pay a gambling debt, and thugs working for the Arena will snatch people if the competition needs some variety. Still, it is a good place to stock up on weapons and supplies from the several goblin merchants in the area. The Arena has the region's most diversified population. Most of the Horde races make their home here; orcs like the competition of the Arena, and the Darkspear trolls will stay where the orcs do.[2]

The disperse troll tribes in Stranglethorn Vale keep close to their tribes, rarely mixing unless they meet in the Arena.[3] After a pirate raid, the Blackwater Raiders of Booty Bay send their loot up the road to the Arena to sell, or even further into Azeroth.[2]

The jungle trolls of the ancient Gurubashi tribe run the gladiatorial games at the Arena. The gladiators are chosen from prisoners of war, kidnapped travelers of any affiliation, those in debt to the Gurubashi, and even some hapless fools who think it would be an easy way to make some quick cash. Something few people know, even those who live in the settlement surrounding the Arena, is that children are born and raised within the Arena to add to the stables. They are trained in many skills beyond the gladiatorial so that the games will be varied from time to time, and also so that the stables will always have healers. If a gladiator gets pregnant, she is taken off the roster until she delivers and the baby is taken from her to be raised in the stables.

The head of the Arena stables, a jungle troll named Bloodstone, has recently become greedy. Although his stables are full of mature teens and young adults ready to fight as well as several captured unwilling fighters, attendance at the fights has been down in the past months. He decided to send a party of his best trolls over the mountains to the Blasted Lands to capture a demon for the Arena. Eventually, a messenger returned and alerted Bloodstone that a felguard had been captured and the triumphant hunters were on their way back to the Arena. This development looked to be certain death for those chosen to fight the demon, and those in the stables only had a couple of days to attempt an escape before the trolls returned.[4]

Slaves captured for the Arena are left with only their the clothes on, as troll guards confiscate any equipment they may have. They are brought to the Arena and are forced to participate in various games.[4] The Arena slavers take in anyone no matter if they are prisoners of war or as unlucky travelers, or they even residents of the settlements around the Arena who owe the trolls money. They can also be of any affiliation, as the trolls capture Alliance, Horde and independent races without prejudice. Even some jungle trolls live in the stables.[5]

Marcus, Kilrim, and Jai'nor were forced to participate in the gladiatorial games.[6]

The Rastakhan's Rumble Hearthstone expansion is based around the Gurubashi Arena. The context is a once per generation event in which the troll tribes of Azeroth make a pilgrimage to the Arena at King Rastakhan's behest to participate in gladiatorial combat under the watch of the loa.[7]