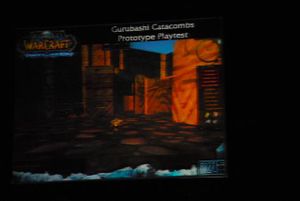 The Gurubashi Catacombs was a deathmatch-style battleground planned for classic World of Warcraft. It was canceled during beta testing due to gameplay issues. The Gurubashi Catacombs was designed as a 5v5 match, similar to the later implemented arena style, and went on to lead to the development of modern arenas and greatly influence how they are laid out. The battleground was going to be located in the catacombs beneath Gurubashi Arena, where dangerous animals were once kept.[1]

The Catacombs were modeled after FPS deathmatch maps; 5v5, single elimination. It was originally very, very large and multi-leveled; but players spent too much time searching for their opponents. 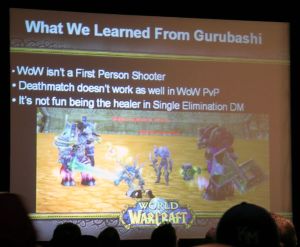 Early into beta testing, the Gurubashi Catacombs battleground was canceled because it was too big, preventing players from finding each other easily, and it didn't appeal to them. Class balance was also a problem, with spell casters dying quickly. At the time, the developers felt it would have required fundamental class revisions to bring the battleground into balance.[1]

Blizzard stated they learned six things from the Gurubashi Catacombs:

During World of Warcraft Insider issue #9[dead link - archived copy], Blizzard stated: "We realized that we were just going to have to instance the battlegrounds and turn them into a mini-game of their own. But at the same time, we've found that during that process you have to make sure that everything in a battleground goes toward that final objective. We actually tried building a battleground internally once, called the Gurubashi Catacombs (we spoke a little bit about it at BlizzCon), and that battleground didn't actually have any objectives outside of killing the opponents."