For the conflict with humans, see Gurubashi War.

The Gurubashi civil war[1] was an internal conflict that occurred between a coalition of Zandalari and Gurubashi trolls (including Hakkari priests) against Atal'ai fanatics loyal to the loa Hakkar the Soulflayer, in the Gurubashi Empire around 1,500 years before the First War. The conflict was the result of the increasingly costly sacrificial demands of Hakkar the Soulflayer, whom the Gurubashi worshipped. In return for vast conquests, the Soulflayer demanded increasingly larger amounts of blood sacrifices, ultimately culminating in his attempted summoning by his Atal'ai zealots. While initially unconcerned, the Zandalari trolls soon came to the conclusion that Hakkar would drive the Gurubashi Empire to ruin.[1]

To combat this, a large force was sent to Stranglethorn Vale where it joined with Gurubashi forces who resented the loa's insatiable demands and the strict theocracy established by his priests. Upon learning that the Atal'ai intended to summon Hakkar into the physical world itself, they forcefully stormed the Gurubashi capital of Zul'Gurub. For days, the two sides battled among the vine-covered ziggurats of the city, until eventually the Zandalari-led forces began to gain the upper hand. Ultimately, the succeeded in preventing Hakkar's summoning and slew the majority of his crazed followers. Following their defeat, many of the Atal'ai and even the Hakkari who had fought against them were either killed or forced to flee the region. They subsequently settled in the nearby Swamp of Sorrows, where they began construction of the Temple of Atal'Hakkar, still intending to summon the Soulflayer. Before this could occur, however, it was destroyed by the aspect Ysera, of the Green dragonflight.[2]

The jungles of Stranglethorn Vale

Following the cataclysmic events of the Great Sundering, the Gurubashi Empire found itself languishing in the southern reaches of a new continent, the Eastern Kingdoms. Cut off from old hunting a farming lands, famine and poverty became rampant throughout the trolls' lands. Although having made small recoveries since then, the Gurubashi Empire was still a shadow of its former self.

Traditionally revered by almost all troll peoples, the ancient loa spirits came to be seen as a means of salvation for the destitute nation. While the Amani Empire, in similar straits, to the north honored a wide pantheon of these beings, the Gurubashi ultimately turned to revering one. Answering their call for deliverance, Hakkar, the Loa of Blood, promised to help the Gurubashi extend their empire and once more achieve prosperity. He would aid them in conquering the entire lower half of the continent, in return for large numbers of blood sacrifices. The vast majority of Gurubashi seized on this opportunity, and those who personally devoted themselves to the Soulflayer became known as the Hakkari. With Hakkar's assistance, they soundly defeated nearby packs of gnolls and tribes of murlocs, as well as other trolls who stood in the way of Hakkar and the Gurubashi. Those taken prisoner were used as part of the vast offerings demanded by Hakkar; the loa would gorge on the blood of the captives for years.

Under the loa's guidance and control, the Gurubashi had succeeded in achieving all that they desired, conquering vast swaths of lands as well as many of the islands that dotted the coasts of the South Seas. From their island in the ocean, and in their self-appointed role as protectors and leaders of the troll race, the Zandalari watched this events unfold with great interest. Initially, they were very pleased with the actions of their jungle troll brethren, who had apparently returned to the ways of conquering and traditional worship.[1]

Soon, however, the Zandalari's joy turned to disquiet. They consulted myths and delved into ancient historical accounts. What the Zandalari would discover shook them to their core. This loa, Hakkar, also known as the 'Soulflayer' (a name he richly deserved), filled his adherents with a murderous rage and revelled in their darkest emotions. The carnage, chaos, and destruction that invariably followed suited the Blood God perfectly - he had developed a taste for it. His bloodlust could never be sated and, worse, he would only become more powerful as he consumed more blood shed in his name, as his tie to the world that was feeding him grew stronger.[3]

Recognising the deadly threat that Hakkar posed to not just the Gurubashi, but also the entire world, the Zandalari rallied a large force and immediately set sail for Stranglethorn to warn the jungle trolls and put a stop to the Hakkari. 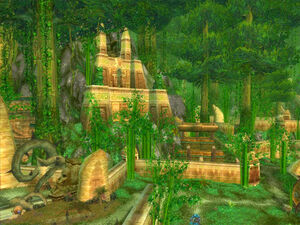 The ancient Gurubashi capital of Zul'Gurub

Having set sail for the southern Eastern Kingdoms, the Zandalari arrived in Gurubashi territory, ready to fight the Hakkari. Meanwhile, Hakkar's demands continued to escalate, and he began to grow impatient with the Hakkari. He now demanded that they begin a ritual to summon him into the physical world itself, allowing him to directly feast on the blood of his victims. So vast was his hunger that he dreamed of eventually devouring the lives of all mortal creatures on Azeroth. By now, most of the Hakkari had begun to guess at the Soulflayer's insatiable appetite, and were shocked at the prospect of the power he might gain and the damage he might wreak if given the ability to feed unchecked. By the time the Zandalari had arrived, the Gurubashi Empire was already in a state of civil unrest due to the increasing demands of Hakkar.

The Zandalari soon met up with the many Gurubashi trolls who, despite their empire's recent success, also saw the mortal danger that was Hakkar's influence, but who had kept their dissent well-hidden from the Hakkari. However, it was not long before the Hakkari themselves joined the coup, informing the others that an extremely radical and zealous group of the Hakkari, known as the Atal'ai, were attempting to summon the Blood God himself into the physical world, regardless of the obvious consequences.[4]

Horrified by the Atal'ai's plans, the Zandalari and their combined force, including the Hakkari, stormed the Gurubashi capital of Zul'Gurub, where the summoning was taking place. They immediately engaged the Atal'ai, who fought with terrifying zeal. Battles raged across the vine-strewn capital and among the mighty ziggurats. Many fell as the fight for the temple city raged on, but the Zandalari and their allies eventually began to gain the upper hand. Finally, atop Hakkar's bloodstained shrine, they succeeded in defeating Hakkar's avatar and most of his crazed followers. Although greatly relieved by their victory, the Zandalari-led forces agreed to remain vigilant for any sign of Hakkar's reappearance. They knew that the loa was not truly dead—his spirit had merely been banished from the physical world.

Exodus of the Hakkari and the Temple of Atal'Hakkar 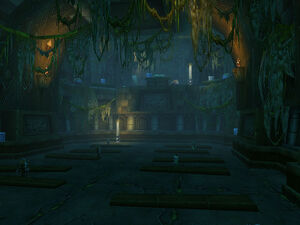 Although the majority of the Atal'ai were killed during the civil war, and in particular during their defeat in Zul'Gurub, some still managed to escape into the surrounding jungles. In response to this, the Zandalari victors ruthlessly hunted them throughout the region, killing many more. Yet, a small group succeeded in making good their escape, fleeing to the forlorn Swamp of Sorrows. Unshaken in their devotion to Hakkar, they began the construction of a new temple to their god, the Temple of Atal'Hakkar, where they fully intended to resume the summoning which had been interrupted with the fall of the temple city.

Meanwhile, having helped fight the fanatical Atal'ai, the Hakkari hoped that their role in carrying out sacrifices for Hakkar would be forgotten. They soon discovered otherwise. Once the more immediate threat of the Atal'ai had been eliminated, the victorious trolls turned on the Hakkari as well, seeking vengeance for the many evil deeds they committed in the Soulflayer's name. The Hakkari subsequently found themselves persecuted almost as ruthlessly as the Atal'ai, despite the fact that they had fought against the fanatics in the war.[5] Many former priests were tortured and executed in grisly public spectacles. Others were torn apart in mob violence. The luckiest of the Hakkari were simply stripped of all their possessions and forcibly ejected from Zul'Gurub. They were warned not to return on pain of death.

Bitter and desperate, the surviving Hakkari came to a terrible decision. They tracked those they had betrayed to the Swamp of Sorrows and pledged to aid the Atal'ai in attempting to summon Hakkar to Azeroth once more. Pleased by the Hakkari's suffering and convinced of their change of heart, the Atal'ai welcomed their former brethren into the temple. Even so, Hakkar had not forgotten that the Hakkari had betrayed him in opposing his first entry into Azeroth, and so the hungry god would always regard the faithful Atal'ai with greater favor. Both groups now bent all their efforts toward bringing about Hakkar's entry into the physical world.

The aspect of the Green Dragonflight and mistress of the Emerald Dream, Ysera the Dreamer, soon learned of the trolls' machinations in the region. Disgusted, she released her full wrath on the temple, blasting its foundations apart and causing it to sink beneath the swamp. To this day, the temple's ruins are guarded by mighty green dragons. What much of Azeroth does not know, however, is that the dragons are actually guarding the wrong location. In recent years, the exiled Atal'ai have discovered that Hakkar's physical form can only be summoned within the ancient capital of the Gurubashi Empire, Zul'Gurub. 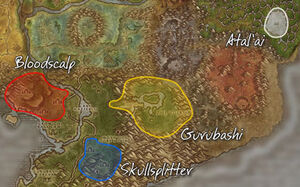 Gurubashi tribal territories some time after the civil war

Following the war, the remnants of the Gurubashi Empire split into various tribes and factions, such as the Bloodscalp, Skullsplitter, and Gurubashi. These groups ultimately went their separate ways, claiming their own territories in the vast jungles of Stranglethorn Vale. These scattered tribes soon began fighting with one another, and at length the Darkspear tribe, which was smaller than most, was driven off the continent altogether and took to the seas. Hoping to avoid further conflict, they settled on a series of remote desert islands. This exodus eventually proved to be a blessing, however, when they joined and achieved prosperity in the Horde. Another tribe known to go into exile was the Shatterspear tribe, which settled in far away Kalimdor.

A fragile and relative peace eventually settled over the broken empire. Nevertheless, trolls continued to speak of a prophecy that Hakkar would one day be reborn into the world; and on that day, would consume it whole.

Var'gazul may have been a leader of the Gurubashi in the conflict.