This giant can be mounted.

He was lured into a trap by his now undead brother, Thiassi the Lightning Bringer, and is a prisoner of the Scourge.[1] 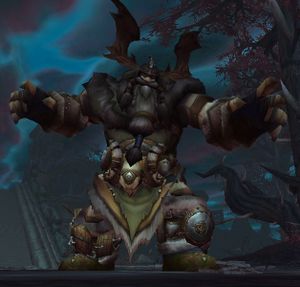 Listen to what I have to tell you about our enemy before we start. You don't want to be unprepared while we're out smashing Scourge in the field.

The Ymirjar battle lord, Algar the Chosen, rouses his Vargul armies at the Reliquary of Pain, northeast of this cage.
Prince Navarius is across the Dead Fields, east of here, near the great steps leading up to the second level of Zul'Drak.
Thrym's location is currently unknown, which is curious considering his size.
All must be dealt with!

I have a few more questions, Gymer.

When you are ready I will place you atop my head and we will march into the heart of the Scourge in Zul'Drak. You must direct me to smash and destroy our enemies!

I have a few more questions, Gymer.