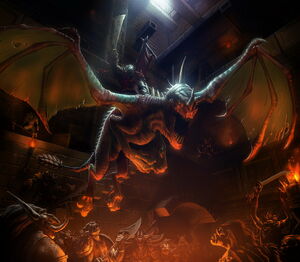 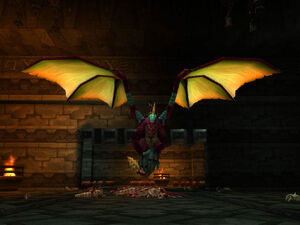 Gyth is a large chromatic drake who serves as Rend Blackhand's personal mount.

Rend Blackhand and Nefarian test their newly created chromatic dragonflight against any group of heroes entering Blackrock Spire, sending wave after wave of the creatures through a gated area. As a raid begins to wear down, Vaelastrasz the Red appears before them, casting a massive healing spell on the entire group before teleporting off again. As still more Dragonkin attack, Vael appears once again, encouraging the heroes to continue the fight and healing their group with his powerful magic.

Finally, Rend himself joins the fray, astride the chromatic drake Gyth. Together, the two are fearsome, the drake utilizing every type of dragon breath attack and Rend swinging a massive blade.

Vaelan comes to the aid of the group again, but this time in his true form; as Vaelastrasz the Red. The red dragon dwarfs Gyth and Rend, and sets upon them with incredible might and fury, his fiery breath forcing Rend to dismount and fight the heroes on foot. Nefarian, furious, threatens the red dragon's apparition and banishes Vaelastrasz from his lair.

With the champion of the Red Dragonflight gone, the heroes are alone against Rend and Gyth, but the two are separated now. Gyth becomes confused without his master to guide him, and quickly falls to the sustained attack. Rend is a formidable opponent, using all the abilities of a seasoned blademaster to cut away at the raiding party. Amidst the chaos of the battle, Nefarian escapes into the upper halls of the Spire: Blackwing Lair.

Note: Vaelan won't just come and help randomly. In order to enter UBRS someone in the raid will need the

[Seal of Ascension]. The Seal has a hidden use effect which will summon Vaelan during the event.