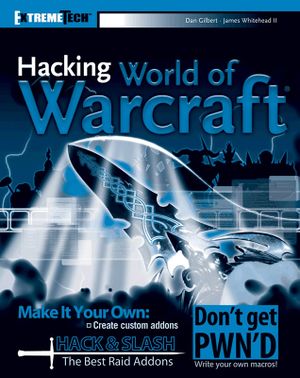 The front cover of the book

Hacking World of Warcraft is part of the ExtremeTech series of books produced by Wiley Publishing. It was written by Dan Gilbert (author of Atlas) and Jim Whitehead (author of PerfectRaid and Clique) in 2006 and 2007, and was published in June of 2007.

The book provides a broad introduction to the topic of WoW Interface Customization. The first chapter of the book covers basics including finding, installing, and managing addons. The rest of the first half then serves as a guide to many of the most popular addons. Finally, the second half presents a couple of in-depth projects which will help the reader learn how to create addons. Macros are also covered in the second half.

From the Back Cover

World of Warcraft is your world. You are fearless. You are in command. And when you can command these awesome addons, macros, and customizations, you'll savor the heady brew of victory. From the masters who gave us Atlas and PerfectRaid/Clique, you’ll learn how to gain an advantage in combat, write spell casting macros, work with frames and XML, develop Lua scripts that work with the WoW API, and more.

Yeah, they’re legal. But don’t let that hold you back.