Hadronox is the second boss of Azjol-Nerub, an instance in the Dragonblight. When encountered, the Anub'ar are attacking him as the players enter the room. It seems like the Scourge forces here are trying to catch the huge spider and perhaps convert it to an undead to use as a weapon, similar to Maexxna in Naxxramas.

During the fall of Azjol-Nerub, nerubian viziers released a single spider that would one day grow to challenge the unyielding forces of the Lich King. Hadronox was instilled with a desire to avenge the fallen and reclaim its home from any that dare threaten it. 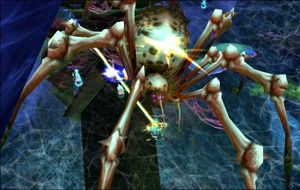 Hadronox in World of Warcraft.

The Pull - Start by pulling the Crusher and two elites to the side. Kill them with the party near the wall. The crushers have a knock-up effect that is mitigated somewhat by the wall surface as it won't throw you very high. This starts the entire chain of events with Hadronox. Hadronox will begin coming up through the web and takes about 2–3 minutes before he gets topside. It is considerably easier for the group to take out the two non-Elites before taking down the Crusher.

After the initial Crusher is pulled, two other Crusher groups will appear where there was only one. If you want to play it safe, pull the closest to the same spot by shooting the elite closest to the party. This will prevent the other Crusher group from coming over as well. If you prefer to get it done, just pull both groups and AOE the little elites. Tanks concentrate on the Crushers.

The Boss - As the final crusher is killed, wait alongside the round platform you entered the webbing at. Have the tank stay down just a little way into the webbing. Hadronox will be killing minions along the way. Do not actually pull Hadronox, let him finish off all the adds (he will web up the doorways they spawn from then finish killing the rest — in fact there is an achievement for killing him on Heroic Mode before he does this). This fight is extremely easy if you have someone in the group that can clean poison. Hadronox's main ability is called "Leech Poison" and it will hurt those affected (large AOE area) and heal Hadronox. Any healing done to a person poisoned also heals Hadronox so de-poisoning helps. If your DPS is high, you can dps through it. Leech Poison is cast very often and lasts until nearly the next casting time. If cleansed, Hadronox doesn't get healed.

Having a shaman in your group, regardless of the role he or she is playing, is the easiest way to do this boss. Placing a Cleansing Totem rids the entire group of poison every 5 seconds. This effectively turns Hadronox into a tank and spank fight.

[Anti-Venom] do not remove the "clouds" on the ground; you must move out of them.

Anub'ar Crusher aggro
Anub'ar Crusher yells: The gate has been breached! Quickly, divert forces to deal with these invaders!
Hadronox moves up the tunnel!