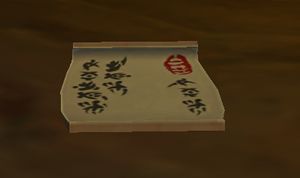 Hai-pu is a form of hozen writing. Small scrolls containing hai-pu can be found at various locations in Pandaria, and can be read by players. 5 different scrolls of hai-pu are currently known to exist.

Hai-pu seems to represent some sort of attempt by the hozen to pass down wisdom, or at least record certain important sentiments and realisations. As such, they can be considered to reflect and epitomise hozen culture's attitudes and values.

Grab, stab, and ookin bite it.

Is worth two in the dooker

They are a bunch of dookers

Best thing ever to exist

It ookin stank of dook

Will not sniff again.

Hai-pu can be found at various locations, but generally in hozen areas. Hai-pu have been found in the following areas:

While only 5 different hai-pu are known to exist, multiple scrolls containing each hai-pu can often be found in the world.

Hai-pu would appear to be inspired by haiku, a form of Japanese poetry. Like haiku, hai-pu is composed of just three short phrases or lines of text, although the similarities may end there.