For his character biography, see Hakkar the Soulflayer.

Hakkar was the last boss of Zul'Gurub.

If you kill Hakkar successfully you were going to receive 400 Rep points with Zandalar Tribe.

If the High Priests around Zul'Gurub are not killed before Hakkar, then he is granted several powerful abilities which combine to make the fight near impossible. In addition, he gains approximately 50,000 health per priest that remains alive. 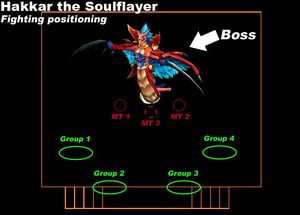 The fight revolves around the Blood Siphon. You need to ensure that the entire raid is poisoned by a Son of Hakkar's poison cloud before each Siphon. To enable this, you will need one person to pull a fast re-spawning Son from the left and right platforms to the raid so it can be killed. The entire raid should get the poison from the ensuing cloud while ensuring that the entire raid is not poisoned for too long, due to the damage caused. There are two common strategies for this.

Hakkar himself needs to be held by 2 or 3 tanks due to him Mind Controlling the current tank, which will cause him to switch to the next person on the aggro list. Hakkar's Mind Control is technically considered to be a Charm effect, so druid tanks are not immune to it. When a tank is Mind Controlled, he should be sheeped by a mage to prevent him from causing too much damage to the raid. This sheep should be dispelled when Mind Control fades. Additionally, due to this Mind Control, it is necessary to have warriors burn their Intimidating Shout as soon as it cools down to prevent the raid being feared. Hakkar will also frequently spit Corrupted Blood at members of the raid, dealing a large amount of shadow damage. Spreading the raid to limit the number of people who can be hit can help but also causes problems collapsing back to receive the poison. The best strategy is to keep the priests in the center rear, so they don't have to move around to get the poison and spread the ranged DPS out to both sides, and closer to Hakkar. As with many boss fights, limiting the damage the AoE attack does it crucial. The Corrupted Blood attack does about 2000 points of damage to a player in total, and if 15 people get corrupted this means a total of 15,000-30,000 HP (depending on how fast it gets cleansed) which need to be healed. Since this happens every 20–30 seconds, this puts a massive load on the healers.

The fight itself requires relatively little DPS, although there is a 10 min Enrage. Hakkar has about 745804 HP. He will do around 1/4 of the damage himself via Blood Siphon assuming everyone in the raid gets the Poisonous Blood each Siphon. As a worst case scenario, no more than 3 people can be without the poison, or Hakkar will heal each Siphon.

This goes without saying, but if at any time you're left with one tank, and the boss isn't at very low HP, a wipe is inevitable. Reset by running down the stairs. Hakkar's the first boss you'll come across that's un-tauntable, therefore it's impossible for a just-resurrected tank to gain enough aggro to tank him - and, of course, he hits hard enough to make healing any randoms that get aggro during mind control into a nightmare. In order to prevent tank death, it is advisable to have at least 6 main healers in the raid. The majority of failures on Hakkar happen because of tank death.

Note that Hakkar can be reset by pulling him down the stairs.

Targets both Main Tanks and sheeps whichever is Mind Controlled.

This must be pressed twice. Once before the sheep breaks, and once after.

NOTE: <<UNTESTED>> <<This will mess up your current target>>

If you are a paladin, replace "Dispel Magic" with "Cleanse" and it will work.

Again, place the names of your MTs in there, and add additional lines if you have additional MTs.

It's possible, with a small raid and high DPS, to DPS through his Blood Siphon without the need for poisoning the raid. However, this does make the fight much more difficult.

A small team of moderately-geared characters can rather easily kill a full-strength Hakkar (without killing any other bosses).

A feral druid can easily solo this by hunkering down in

[Bear Form] and keeping a steady

[Rejuvenation] to heal themselves. This was done after soloing the 5 "main" bosses in ZG. Warrior in a passive unhittable set can solo this without a problem. Also a Death Knight, Paladin or Shaman can solo it with

[Death Strike] and self-healing. Though, you have to have the damage to get him down before 10min enrage or you will die and it does take about 8-10mins to solo him. It will only take you about 4mins in current high-end PVE gear.

Warlocks and Hunters, while able to be mind controlled, can still solo this boss. The Mind Control effect causes the afflicted target to use low-end spells, meaning that an MC'ed Warlock/Hunter will not kill their pet during a full duration MC and can, therefore, heal their pets up between MCs. It's highly suggested for a Warlock to use a passive, Phase-Shifted Imp during this fight, as they will still gain Soul Link (but they will not be Mind Controlled as long as the Imp stays phased).

Tip for DK's - Make sure you aren't spec'd for Bloodworms, and make sure you don't use a ghoul or Army of the Dead while fighting Hakkar. If you are the only one fighting Hakkar he won't use his MC ability. If Bloodworms or a ghoul is active, he WILL use his MC, and you will kill it(them) before the duration of the MC is up, thus causing him to reset, and fully heal.

First player steps on the Altar of Blood