Halaa is a small town on a plateau in Nagrand. It was the primary draenei research facility for the study of naaru crystals.[1]

There are four capturable wyvern roosts located around Halaa that can be captured to bombard the plateau from above, aiming to kill the 15 NPC guards. Each wyvern flight gives you 10 fire bombs, which do ~1000 damage on impact, and then a 1% of Max HP as a damage over time area affect (which is mainly intended to kill off the guards, which have over 1 million health points). The faction defending Halaa can destroy the wyvern roosts and attempt to ambush players returning from a bomb run; it is advisable to save one bomb for the landing to reveal any would-be ambushers (the bomb's effect on players, however, is rather negligible). Killed defender NPCs will eventually respawn. 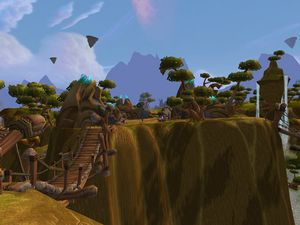 Note that while the bomb effect is negligible to players beyond the original ~1000hp initial hit, should they continue to stand in the fire spot it creates they will continue taking ~1000hp every few seconds.

Once all 15 NPC defenders are dead, a LocalDefense/WorldDefense message "Halaa is defenseless!" signifies that Halaa may be captured by having more players than the opposing faction on the plateau itself.

As of patch 2.4, a daily quest is available to earn 209 honor from killing 10 enemy players in Halaa. The quest is acquired from Lakoor near the jail in Telaar for the Alliance, or from Karrtog in Garadar for the Horde. This quest can be completed within a raid group.

For each PvP kill near Halaa, you receive a

[Halaa Battle Token]. You receive Battle Tokens for a PvP kill only if you or a member of your group deals the killing blow. While your faction controls Halaa, you can trade in 10

[Oshu'gun Crystal Powder Sample] for one

[Halaa Research Token] through an NPC in Halaa itself. These tokens can be traded in for rewards through a Quartermaster NPC only available when Halaa is controlled by your faction.

In Warlords of Draenor, the Garrison mission Mysteries of Lok-rath provides the opportunity to get many tokens at once, due to the farming difficulties of both PvE and PvP in old expansion content. 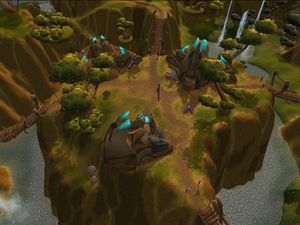 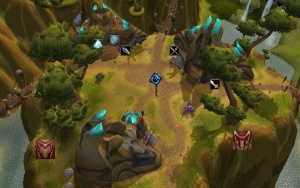 When controlled by the Alliance

When controlled by the Horde 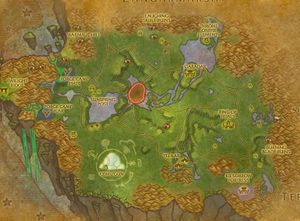 Archaeology may bring more people to complete for control of Halaa, as hostile guards can be nuisances at best and actual dangers at worst. With their vast HP pools, would-be archaeologists are advised to give the guards a wide berth. Alternately, wrest control of Halaa from the opposing faction (or at least dispose of the guards) via the usual bombing methods.