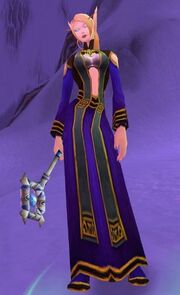 Haleh, before the Shattering

Haleh is a blue dragon quest giver found near the entrance to Mazthoril in Winterspring. At the conclusion of the Nexus War, Haleh became the last living consort of Malygos, and the first consort ever to outlive a Dragon Aspect.

Haleh is a blue dragon matron, and now the Matron Protectorate of the blue dragon lair Mazthoril in the cold region of Winterspring. She is studious, enjoying both literature and scholarly texts, and studies any bit knowledge or trivia that she comes across. She is also best known for altering her forms and integrating into other societies. Haleh currently prefers the form of a female high elf. Like all blue dragons, she is peaceful, but very territorial.

With Haleh on his side, Malygos searches for any magical source or artifact and protects them so that mortal races may not endanger the world with their reckless use.

Awbee, an injured blue whelp on the ground inside Blackrock Spire, asks a group of heroes to find Haleh with one of its scales, as a message. Haleh requests their help and recruits them as her agents to make sure that Nefarian and his chromatic dragonflight are destroyed.

In another quest by Haleh, she asks Alliance heroes to get the blood of Drakkisath to create a device that may grant them access to Onyxia's Lair.

What is it you ask of the Blue Flight?