A half-draenei is the offspring of one draenei parent or half-draenei and another species such as an orc.[1] Half-draenei may have less-pronounced draenic physical features, such as horns, tails, or hooves.[2][3] Garona Halforcen, and her son Med'an, show little draenei features like shiny eyes or chin spines on the latter, instead looking almost entirely orcish. Half-orc half-draenei is the full name to describe the race when one they are part half-orc and part half-draenei. Half-draenei is the short form. Orc-draenei half-breed is another way of describing this combination. Prior to Exodar crashing on Azeroth the only known half-draenei known[1] would have had to been of Lost Ones (and possibly Broken) descent).

Half-orc, half-draenei are reviled and scorned by both draenei and orc cultures.[4] According to Lantresor of the Blade, his kind are a rare breed, with most having been killed decades ago.[5]

Around 99 years before the First War, the Bladewind orcs began raiding draenei caravans. While many draenei wanted to retaliate, their leader Velen forbade it. Instead, he allowed the Rangari to launch covert missions to rescue prisoners, while future caravans were well guarded, often by squads of Vindicators. The Rangari managed to save a number of prisoners, but not all. These few poor souls were forced into slavery for the rest of their lives, and some of them bore half-breed children for their masters.[4] Many years later, Garona Halforcen was one of the few Bladewind half-breeds who survived past childhood.[6]

Garona is a orc-draenei half-breed,[7] although she personally identifies with her half-orc heritage and others primarily identify her as a half-orc.[8][9][10] She and others believe her to be half-human (two speculative races were invented to describe her nature: near-humans[11] and humans of Draenor descendant[12]), this confusion was caused by Gul'dan who lied to Garona and told her she was half-human.[13]

Lantresor of the Blade is an individual confirmed to be of half-draenei and half-orc descent. He uses a normal orc model. 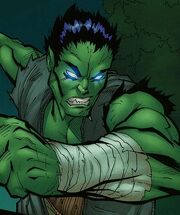 Med'an is the son of the half-orc half-draenei Garona and Medivh. This makes him quarter orc, quarter draenei, and half human.

Brann Bronzebeard believes that Garona may "not" be a half-draenei as her features did not match that of the draenei or any other known race other than human, but it would seem unlikely that she was human due to her age, as she was already a young woman at the time of the First War.[3] One explanation to this may be that Brann had never met a half-draenei and doesn't know how they look like (although there is a section describing the half-draenei in Horde Player's Guide it isn't told to be written by any in-universe character[1]). Other explanation may be that Brann had never met an unmutated draenei and only knew the Lost Ones as Horde Player's Guide was written before the crash of the Exodar, so he may have compared her with the mutated draenei and he didn't find a relation.

So far the term half-draenei has only been found in sources describing orcs. It might be possible that in settings describing other races the term might describe a half-draenei/half-other (in the same way as a draenei probably would use the term half-orc for a half-draenei/half-orc). It may also be possible that as was the case with half-human half-ogres, that a long description is given in order to designate any racial combinations that go outside the norm. In contrast, half-elf, half-blood elf, half-night elf, and half-orc are defined almost universally as races that originated from humans and the specified race. Half-draenei, half-ogre, and half-ogre mage are exceptions in that they so far only refer to races created through the interbreeding of orcs and a non-human race.