Half-ogre Rexxar has a unique model.

Half-ogre (or Mok'nathal)[1] is a term used to describe the offspring of an ogre and an orc. Most of them are found within the Mok'Nathal clan.[2]

Before the existence of the Horde, the races that represent most of it today had never even heard of each other, such as half-ogres who were all but unheard of.[4]

Half-ogres, whom the orcs call mok'nathal, were created in the rare unions of orcs and ogres. Orcs originally bred half-ogres to combine the power of an ogre with the intelligence and cunning of an orc. However, half-ogres proved to be more stubborn than either race, bearing a horrendous independent streak. Little could change a half-ogre's mind once set, so the project was scrapped. Shamanistic orcs honored half-ogres as noble and savage creatures of the land, but quickly the race dwindled, as few orcs would willingly breed with the gigantic ogres.

Recently, half-ogres reappeared in the world following the exploits of Rexxar, Champion of the Horde, the greatest Mok'nathal to ever live. While still rare, more and more half-ogres come out of the woods each day, trying to find a place to call their own.

Even in the presence of friends, a half-ogre is quiet and withdrawn, uncomfortable around creatures that talk back. A half-ogre would choose to be out hunting or exploring a new wilderness rather than take a drink at a bar, and most half-ogres exhibit signs of claustrophobia.

The ruling force in life for half-ogres is honor. A half-ogre's word is his life, even among the rare evil half-ogres. Once a half-ogre gives his friendship to a person, that person is a friend for life and the half-ogre will sacrifice himself for those under his protection or those he loves. Most half-ogres honor the vows of another half-ogre, and thus a person who earns the trust of one half-ogre is assured that she has earned the trust of all half-ogres.[5]

Half-ogres are towering creatures who vaguely resemble their orc and ogre parents. They stand as big as a tauren — sometimes bigger — with broad and powerful shoulders, and thick, blunt skulls. Their eyes are small and usually black, while their massive lower jaws bear great tusks. Half-ogre skin tone is a non-metallic gold hue, with varying levels of yellow and red admixture. Most half-ogres are mistaken for small ogres, or rarely, massive orcs.[6]

Half-ogres do not have a region to call their own. Solitary wanderers by nature, half-ogres are found sporadically in most woods in Kalimdor and Eastern Kingdoms. Most are found near major ogre settlements, or former settlements, leftovers from ogre aggressions and old habits of Legion-affiliated orcs.[5]

The majority are affiliated with the Horde. While half-ogres prefer animals to people, they realize that they have a greater part to play in the world. Following Rexxar the champion, most living half-ogres offered their assistance to the Horde. Many half-ogres still refuse to officially join the Horde, but Thrall knows that he may call upon half-ogres in times of need.[5] 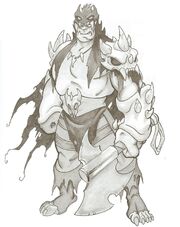 Almost unanimously, half-ogres revere the nature that feeds and protects them. To them, the wild is much safer and more familiar than any civilization. Some of the greatest hunters and druids among the Horde's ranks are half-ogres, who combine both physical and spiritual strength in ways only the tauren can match. Many choose to be Beastmasters.[5]

Half-ogres usually speak Low Common or Common. Their ogre progenitors used to be part of the Horde, and some learn the languages of other savage creatures.[7]

Half-ogre names are closer to ogre than orc names. Their first names are almost always single-syllable and guttural. A half-ogre’s family name, however, always bears a beast or plant symbol — which may be the closest to a family that they have. Their surnames reflect their life choices and accomplishments, and the race wears them as badges of honor. Trials of rights are fought over family names, with the victor earning the name and the loser shamed.[8]

While all half-ogres are of ogre or half-ogre and orc descent in the main series, in the RPG there were other types of half-ogres.