High Commander Halford Wyrmbane is the leader of the 7th Legion and Wintergarde Keep, a major Alliance base in the Dragonblight.

Wyrmbane served as a knight during the founding of the Knights of the Silver Hand. Believing priestly orders couldn't mix with martial skills, he continued to focus only on combat training. After observing the first paladins, however, Wyrmbane became inspired by the faith and dedication of Turalyon. When the Alliance Expedition was presumed lost following the Invasion of Draenor, Wyrmbane realized that warriors could also be devout followers of the Light. Wyrmbane vowed to honor Turalyon's sacrifice by being both a soldier and a paladin.[1]

He has led the 7th Legion in crucial wars throughout recent times, timing back from the Battle of Mount Hyjal, and continues to lead the Legion to this day.

Commanding the 7th Legion from Wintergarde Keep he directed the adventurers into freeing trapped villagers from Scourge-occupied town center. His men, Bolvar, and the adventurers defeated Thel'zan the Duskbringer[2] (formerly the treacherous priest Inigo Montoy) who was given the phylactery of Kel'Thuzad which — as it was not destroyed — allowed the Archlich to regain corporeal form.

He is later seen on the Isle of Conquest battling against the Horde, being opposed to Overlord Agmar and his Kor'kron. 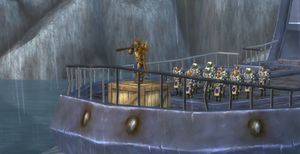 Halford on a submarine during

During the Cataclysm, he was headed into the Ruins of Gilneas, regaining it for the Alliance from the Forsaken, and supporting the Gilneas Liberation Front. Wyrmbane gave orders to Master Sergeant Pietro Zaren.[3] And was seen briefly on the deck of the X-2 Pincer submarine.[4]

He was probably still commanding the Alliance forces in the region.

During the events of Legion, Halford Wyrmbane appears when an Alliance player reaches Prestige rank 2, alongside several other wartime leaders of the Alliance. There, he can be found among the procession using a sword similar to that of

Learning that Turalyon was alive, how the Light had sustained and transformed him, and witnessing his return to Azeroth only strengthened Wyrmbane's resolve and devotion, feeling that his faith and his choice to become a paladin had been well placed all those years ago.[1]

Halford Wyrmbane greets heroes recently returned from the Battle for Lordaeron in Stormwind Harbor. He expresses melancholy over the number of Alliance soldiers lost in the fight.

On King Anduin Wrynn's orders, the 7th Legion traveled to Kul Tiras with Genn Greymane to ensure that Jaina Proudmoore's mission of getting the Kul Tirans to rejoin the Alliance succeeded.[5] Halford can be found aboard the Wind's Redemption docked at Boralus, where on orders from Anduin he directs the Alliance's operations to secure their position on Zandalar and Kul Tiras.[6] Once footholds are secured, he co-leads the Alliance's war effort on Zandalar alongside Shandris Feathermoon.

A version of Halford appears in the Vision of Stormwind.

We are 7th Legion.

Conversation with Mathias Shaw on the Wind's Redemption