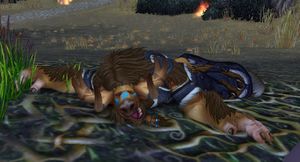 Halian Shlavahawk is a Highmountain tauren located in the Valley of Strength in Orgrimmar. Once he met the adventurer, he resolved to go to Ashenvale.

He is later found deceased on the border between Ashenvale and Northern Barrens, exactly at Mor'shan Rampart's border end with the Fallen Sky Lake of the Ashenvale Forest.