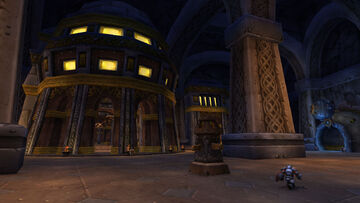 The Hall of Explorers

The Hall of Explorers, also called the Assembly of Explorers,[1] is a major district in the dwarven capital of Ironforge and the headquarters of the famed Explorers' League. Every archaeological expedition organised by the Alliance is coordinated from here, while it also houses one of the most complete museums of artifacts in the world.

The Library is the centerpiece of the Hall of Explorers, and contains the museum as well as a vast collection of tomes and knowledge. The district itself is accessed from the Forlorn Cavern, Great Forge, and Tinker Town from the west, southwest, and south respectively.

The Explorers' Guildhall is located here.

In the League of Explorers adventure of Hearthstone, the Hall of Explorers serves as the fourth and final wing of the adventure. Arch-Thief Rafaam has used the Staff of Origination to animate several of the exhibits in the Hall. It houses the following powerful artifacts: