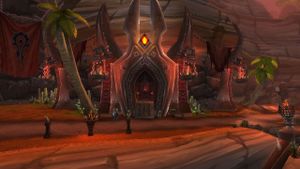 Hall of Legends in Cataclysm.

The Hall of Legends is the officer's barracks for the Horde. It is in the Valley of Strength, in Orgrimmar.[41.8, 72.3]

In the center of the Hall is a table surrounded by four Horde: Chieftain Earthbind of Thunder Bluff, Advisor Willington of the Undercity, Blood Guard Hini'wana of the Darkspear Trolls, and Councilor Arial D'Anastasis of Silvermoon City. On the table are several maps of Azeroth, as well as an open book titled

[Military Ranks of the Horde & Alliance], which lists the old PvP ranks and accompanying insignias.

Its Alliance counterpart is the Champions' Hall in Stormwind City.

Secret armory of the Crimson Ring 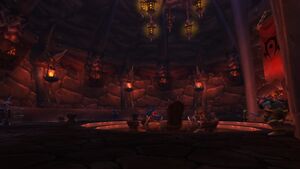 Hall of Legends in Cataclysm.

The Hall of Legends in Orgrimmar houses the secret armory of the Crimson Ring. The weapons stored here come from every continent on Azeroth and the orcs' homeworld, Draenor. Many were taken as spoils of war and bear a proud history of battles lost and won...