Hall of the Brave 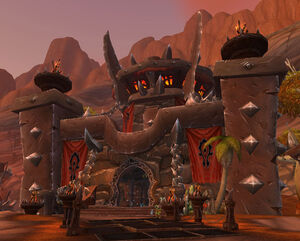 Hall of the Brave

The Hall of the Brave is a large barracks located in the Valley of Honor in the orc capital of Orgrimmar. The Hall contains many of the Horde's army officers, warrior trainers, and battlemasters.

Several training dummies are located throughout the building, inside and out.

The previous barracks was a single floor building with an interior that mostly matched the Hall of Legends. It was rebuilt using the new and improved orc architecture, that was first seen in Northrend.

After the introduction of the Mag'har clans into the Horde, they can be found throughout the hall, using it as an impromptu home. New Mag'har characters start just outside of this building.

When Varok Saurfang and his allies surrounded the city at the end of the Fourth War, Eitrigg arrived to the hall. Soon, an adventurer came here and confronted Eitrigg. When confronted about meeting Saurfang in secret, Eitrigg openly admitted to it while remarking that he grew tired of the deceit. Believing that Sylvanas is driven by something dark, Eitrigg vowed to draw blood for her no longer. He then revealed his intention to join Saurfang's army outside of Orgrimmar and asked the loyalists to stand with him. Should the loyalists agree, then they both exit Orgrimmar together and join the revolution,[1] however, should the loyalists refuse, Eitrigg declared that their choices have been made.[2] Eitrigg would lose the subsequent the fight to the loyalists, taken captive, and delivered out of the Hall of Brave to Nathanos Blightcaller.[3]