They are also sold in stacks of 5 from the following vendors:

This item is a quest reward from the following quests: 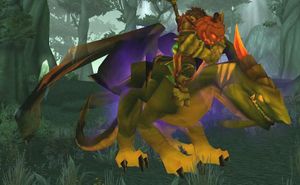 The Great Pumpkin prepares for his nightly ride.

The 4 possible forms when you eat this also have effects other than appearance:

If you receive the Great Pumpkin effect while another effect is active, you will receive both benefits and looks at the same time. This is only confirmed for the Pirate effect currently.