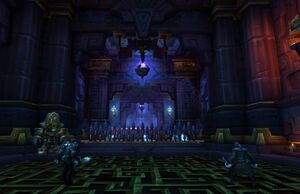 Mathias and Flynn infiltrate the treasury.

The Halls of Opulence are an inner section of Dazar'alor's pyramid in which the Zandalari King's treasury is found. It is also the first area visited by Alliance players inside the palace during the Battle of Dazar'alor instance.

Long ago, King Dazar had his golden treasury enchanted so that it would rise against anyone except its rightful owner. Many unsuspecting thieves have been slain by the very riches they coveted, serving as an important lesson to those who would steal from the throne.[1]

The Abyssal Scepter that had been stolen from Boralus by the Horde was placed here. At some point later, the Alliance members Mathias Shaw and Flynn Fairwind infiltrated the treasury to stole the scepter back.[2]

The living treasure known as Opulence was finally defeated by the Alliance during the Battle of Dazar'alor. 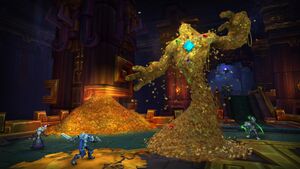 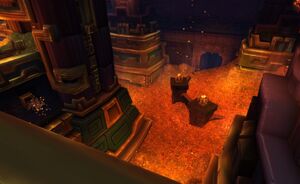