The Halls of Origination in Uldum is a level-85 five-player dungeon available in World of Warcraft: Cataclysm, featuring an unparalleled journey through the timeless titan construction and seven unique boss fights. Hidden deep within its halls lies an ancient treasure that, if placed in the wrong hands, could endanger all life on Azeroth. Should players survive the perils of Uldum, they will be called to help Brann Bronzebeard unlock the mysteries within these treacherous titan halls and protect the titans' ancient secrets. 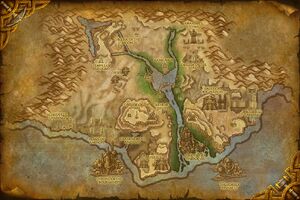 of eastern Uldum inside the large pyramid.

Outside the pyramid are four massive statues, placed as if acting like sentries for the Halls of Origination and the grounds in front of it. They represent the four titanic watchers inside the dungeon at The Four Seats: from the left to right, Rajh, Ammunae, Setesh and Isiset.

Until recently, little has been known of Uldum's Halls of Origination - save that they were constructed by the ancient and godlike titans, the beings responsible for many of Azeroth's races. Recent findings from Alliance and Horde explorers, however, suggest that the halls are among the most important titan creations in the world. The sand-filled pyramid is an archaeologist's delight, filled with relics of an earlier age and the fearsome automated defenses that protect them. But a greater treasure is rumored to lie hidden deep within the halls - a secret that could endanger all life on Azeroth. The armies threatening Uldum know of this secret, and they hope to use it as a weapon. Finding, entering and protecting the Halls of Origination is no longer a matter of academic interest.[1]

The Halls of Origination have been occupied by the Amathet, a group of tol'vir who believe only they can protect the titans' works and plan to use the Forge of Origination contained within to reoriginate the planet and free it from the Old Gods.[2] Magni Bronzebeard and an adventurer entered the Halls, dealt with the Amathet and reactivated Forge of Origination.[3] Later, they discovered that it has also been attacked by the forces of N'Zoth, who sought to use the Forge to overwrite reality with Ny'alotha.[4]

The Ramkahen then took control of the Halls, only to be defeated by the Amathet again. This time, the adventurer was accompanied by High Explorer Dellorah and defeated Inimot, the Radiant Blade, stopping their plan to reoriginate Azeroth.[5]

Constructed by the great titans, the Halls of Origination are filled with ancient relics and the fearsome guardians that protect them. Rumors abound that the complex also contains a devastating weapon capable of reordering all life on Azeroth. Deathwing has moved to obtain this terrifying device through his agent, Al'Akir the Windlord. Thus far the facility's communication systems have been fully corrupted, but the weapon inside continues to elude Deathwing's grasp. 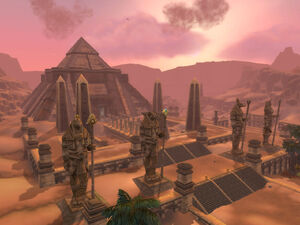 Halls of Origination at the sunset.

You will immediately learn the gravity of your situation in the Maker's Overlook when stumbling over the bodies of those who have entered the Halls of Origination before you, seeking power... and failing. Those who survive beyond the entrance of these ancient corridors will be greeted by Brann Bronzebeard just outside the dungeon's transport system to the upper reaches. It will require more than the guidance of Brann to advance upward, however, as the secrets of these halls must first be unlocked.

The column-strewn Chamber of Prophecy is truly a testament of time. In a room adorned with the relics of an ancient culture, two arks await investigation, protected by ever-faithful servants. Those who meddle with the titan relics must answer to Temple Guardian Anhuur, the overseer of this chamber and a master of holy magic and devastating hymns.

Across from the Chamber of Prophecy and just outside the dungeon's walls lies the Tomb of the Earthrager, entrenched within a pyramid sun-scorched and bombarded with sandstorms. Littered with the bones of the long deceased, the tomb waits to collect more unprepared victims. It is, after all, the resting place of Earthrager Ptah. Those who disturb his tomb disrupt an eerily quiet place before Ptah shakes the ground beneath you in a Tumultuous Earthstorm, bringing to life the weathered bones of the deceased and unearthing vile Scarabs.

The Vault of Lights

With walls weighted by priceless titan artifacts, the Vault of Lights will serve as a chamber of punishment for your intrusion. Anraphet, a haunting statue of titan composition, awakens to serve his fellow keepers and eradicate all mortals who enter. Make no mistake: his long slumber will not prevent him from showing absolute wrath.

Seats of the Keepers

Survivors of the halls' depths will gain access to the upper reaches. With help from Brann Bronzebeard, you must uncover the mysteries of Uldum. Your journey will lead you to areas of ultimate consequence: the Seats of Magic, Life, Chaos, and Radiance. Here you will be confronted by the construct of magic Isiset, construct of life Ammunae, construct of chaos Setesh, and construct of radiance Rajh. You will be tested by these constructs of Uldum, who will not easily give up their thrones or the secrets of the titans.

Only by exploring Uldum's Halls of Origination in World of Warcraft: Cataclysm will you have a chance to uncover their dangerous powers, and perhaps even the mysteries behind the origins of life on Azeroth.[6] 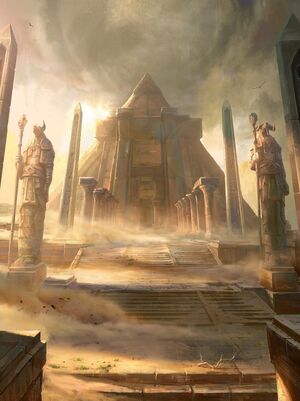 The entrance to the Halls, as seen in Chronicle Volume 1.

The Halls of Origination are located in Uldum, north of Vortex Pinnacle. The entrance to the pyramid is on the eastern side. It's likely that you'll discover this dungeon on your map while questing since it's smack in the middle of early Harrison Jones quests. There is a third floor not on the map visited during

The bosses are based off the Egyptian mythology pantheon: Earthrager Ptah (Ptah), Isiset (Isis) (ironically, "Isiset" is a combination of Isis and Set, the latter was responsible for the murder of the former's husband, Osiris), Setesh (Set), Rajh (Ra), Anraphet (Anubis) and Ammunae (Amun).