Hammer of the High King 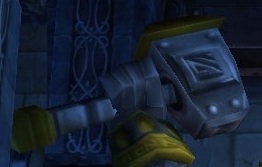 The Statue of Modimus Anvilmar, holding the Hammer of the High King aloft.

The Hammer of the High King (also known as Modimus's Hammer) was the hammer of Modimus Anvilmar, the last high king of Ironforge. After his death just before the War of the Three Hammers, the hammer mysteriously disappeared. Centuries later, a scroll was found in the Ironforge library that stated that the hammer had been broken into three pieces. During the chaos of the war, each clan had, in one way or another, managed to obtain one of the fragments:

Under decree of the Council of Three Hammers, the Hammer of the High King was to be reassembled as a symbol of the clans' newfound unity (although Kurdran was loathe to give up the scepter for personal reasons) and reforged by a Dark Iron smith. The day before the reforging, however, Advisor Belgrum discovered that the parchment was a well-made fake and had probably been planted in the Library. At best, the three pieces may have been found after the civil war, and at worst the head and crystal were likely also fakes. Despite this, Muradin Bronzebeard and Moira Thaurissan agreed to continue with the reforging and keep secret the forgery. Kurdran disagreed with the lie, and later in the night he stole the Wildhammer scepter that was to be used as the hammer's handle. A confrontation with Moira revealed that she was ultimately responsible for the whole plan, and it was insinuated that the Dark Irons planted the scroll under her orders. When it was discovered that the scepter was missing Kurdran admitted he had stolen it, but instead of letting it be reforged and allowing the lie to continue) he smashed the scepter with his stormhammer. Kurdran declared that the union of the dwarven clans shouldn't start with reforging a hammer that could be fractured again. Instead, he proposed that the dwarven clans move forward from the past and unite with a fresh start. Muradin gladly joined him, and Moira had no choice but help in fracturing their fragments lest she lose face in the eyes of her people.[1]