For the warlock ability, see

[Hand of Gul'dan]. For the quest, see 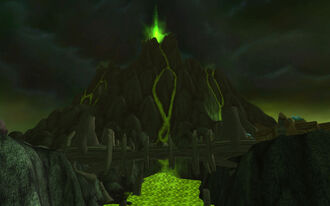 The Hand of Gul'dan. 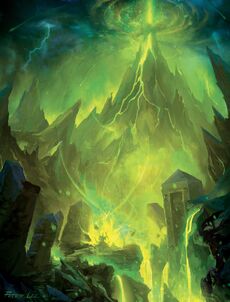 The Hand of Gul'dan is a massive volcano west of the Black Temple in Shadowmoon Valley. It is named after Gul'dan, the warlock who aided Medivh in opening the Dark Portal. According to the Earthen Ring, this volcano was raised by Gul'dan himself when he severed the connection between the orcish people and the elemental spirits of Draenor, and dominates much of the landscape in the valley. The truth is the volcano always existed, and the spell that severed the connection to the elements also turned the volcano fel.[1]

A vision of this act is repeatedly depicted at the Altar of Damnation, near the Fel Pits on the volcano's western face.

Alternate Gul'dan tried to create the volcano as well in alternate Shadowmoon, but was stopped.[2]

Although Chronicle Volume 2 claims the volcano was there before Gul'dan's spell, it is not obviously present in the Warlords of Draenor Shadowmoon Valley. However, it may have been dormant as the hill that Teluuna Observatory was built on or as Light's Fall, which resembles a volcano crater.