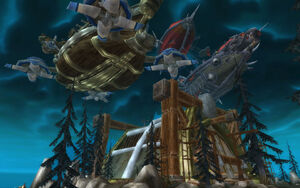 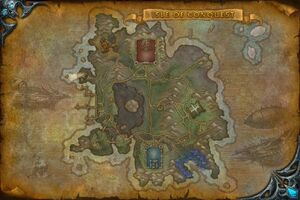 can be found on the eastern side of the Isle of Conquest, situated on a bluff high above the Workshop. The Hangar's capture flag is near the north end of the bluff, closer to the Horde Keep. To gain access to the gunships, the controlling faction one of the two teleporters on the perimeter of the hangar itself, or the teleporter near the capture flag.

The Alliance/Horde airships launch from the Hangar, and can be used to access the enemy Keep by parachuting down or by destroying enemy gates using the Gunship Cannons.

The gunship launches from the Hangar, circles around the enemy Keep, and then returns to the Hangar for a short time before launching again, limiting your total attack time. It follows a flight path directly over the west side of the opposing Keep, rendering cannon bombardments on the west gate and west tower nearly impossible.

Horde Gunship Cannons
Five cannons line the port side of the gunship, allowing players to bombard both Keep Gates and enemies. These cannons cannot be attacked, but have a limited turn radius that makes it difficult to fire on your enemy for some of the gunship's flight.

Parachute
You automatically receive the Parachute buff when aboard the gunship. Jumping off of the deck will deploy the parachute for you, which can then be used to drop down inside the enemy Keep.