Haqin of the Hundred Spears 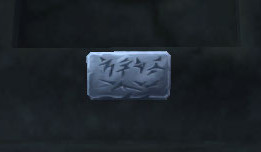 Haqin of the Hundred Spears

Haqin of the Hundred Spears is a mogu spirit whose tomb marker can be found at the southeastern end of the Court of Bones on the Isle of Thunder. Using the

[These Mogu Have Gotta Go-gu].

Haqin's melee swings do not hit all that hard, so neither does the Brutal Strikes he frequently casts. He will spin up in a Whirlwind, so combatants should leave melee range when he starts casting it. His signature ability is Spear Barrage, which fires a large number of spears all over the area, typically in a line passing through the adventurer's position. Get out of the red circles on the ground, which indicate where the spears will land.

In the years before Lei Shen's rise to power, the mogu clashed against the other races of Pandaria. The mogu fought against the jinyu empire in a battle that lasted forty days and forty nights.

From behind the frontlines, the jinyu waterspeakers hurled columns of water, drowning the mogu forces. They conjured bubbles that lifted mogu to their air, then sent them plummeting to their deaths.

Finally, with the mogu forces nearly beaten, an unknown foot soldier rose up against the fish men. The foot soldier grabbed a basket of the jinyu's long fishing spears, and hurled them over the field of battle with deadly accuracy.

The spears pierced through the waterspeakers' shield, putting an end to the resistance. And so it was that the battle was won.

Afterwords, the Thunder King presented Haqin with a hundred of the finest golden spears crafted by mogu forgemasters. He became one of Lei Shen's greatest lieutenants, and after his death, the spears were buried at his side.