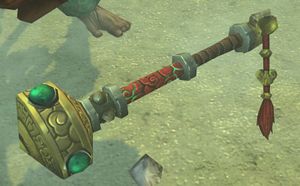 A vision of the Harmonic Mallet

A vision of the broken Harmonic Mallet 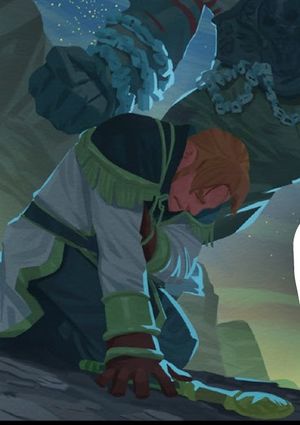 Harmonic Mallet in Anduin's hands as depicted in Son of the Wolf.

[Divine Bell] created by the mogu. When they struck the bell with the mallet, the monks were able to create pure harmony. Sometime after that, it was stolen by the Monkey King as a "prank".[1] Fearful of what would happen if the mogu stole the mallet after already having stolen back the Divine Bell, the Monkey King split the mallet and scattered the two pieces across Pandaria to keep them from falling into mogu hands.[2]

[Mallet Handle] was purposely "lost in a bet" to Chief Ingoo Ingoo of Unga Ingoo and was passed down through the generations, but has since been used to do harm.[3] The

[Mallet Head] was given to a Kunzen chief on the Skyrange, but was stolen in recent times by the virmen Skiggit.[4] In addition to the handle and the head, a

[Divine Bell]. The ointment was made during the time the bell and mallet were both made, and none has been created since. What's left is in the hands of The Blade, an elite mogu warrior found in Townlong Steppes in the shadow of the Serpent's Spine.[5]

During the war on Pandaria, the Alliance restored the Harmonic Mallet and Prince Anduin Wrynn used it to counter the Divine Bell used by Warchief of the Horde Garrosh Hellscream.