Harpies are vicious, flying creatures that resemble a cross between a night elf female and a hunting bird, with long talons for feet and large graceful wings for arms. Despite the similarity, they have little in common with the elves. Harpies employ nature-based magic like night elves, but they destroy the environments in which they settle, killing every creature they encounter and despoiling the land to build nests noted for their noxious odor. Harpies originally hail from the Stonetalon Mountains, but have since spread out across Kalimdor, Northrend,[2] and the Broken Isles.

The cackling bird-women are capable of powerful elemental storm magic. Little is known about the source of their power, as they attack invaders on sight, few can discern any meaning behind their shrill cries, and none can tolerate the smell of their nests.[3] They only get more beautiful as they age.[4] 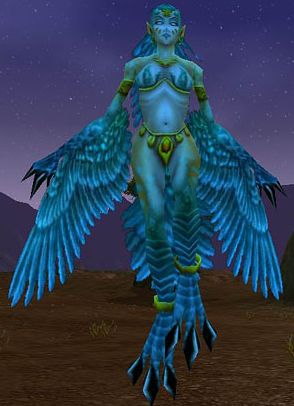 A harpy in World of Warcraft. 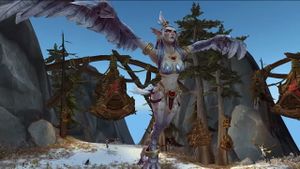 A harpy in Highmountain.

After the death of Aviana and the destruction of the Mother Tree G'Hanir, many mourned it and some succumbed to the temptation of serving dark forces in Aviana's absence. The remaining branch of the tree was hidden away in order to protect it, for many of Aviana's children had been lost to chaos, and they might be driven to claim the remnant of Aviana's legacy for their new masters.[7] These vile, unscrupulous winged women live only to cause mischief and sorrow.[8] In World of Warcraft, harpies are found in Teldrassil, the Stonetalon Mountains, Feralas, Mulgore, the Thousand Needles, Alterac Valley, the Dragonblight, the Storm Peaks, the Barrens, Durotar, Highmountain, Suramar, and Val'sharah.

Once content to confine themselves to their ancestral home in the peaks of the Stonetalon Mountains, the feral and vicious harpies of Kalimdor have spread their influence across the length and breadth of the continent. The vicious winged women have taken to raiding unsuspecting caravans and savaging any who cross into their territories. Their nests, littered with the gruesome remains of their victims, are now a common sight from the arid mesas of Durotar to the lush forests of Teldrassil[9] to the icy reaches of the Dragonblight and the Storm Peaks.

If not driven out, they quickly range out attacking anything and everything they can get. Harpies are clearly very intelligent, since they are able to communicate with other races when they wish to. The common echelons of harpy society attack with crude weapons or simply with their razor sharp talons. They are well used to the ways of divine magic and treachery.[citation needed]

Harpies are said to be allies with kobolds.[6]

The kiss of a harpy is poisonous. There are ones that have lured the unknowing in to kissing them. A known side effect is a very high fever.[10]

Harpies which dwell on the Broken Isles are much larger and more powerful than their cousins in Kalimdor.[11] Long ago the harpies of Highmountain lived with respect to the area and its inhabitants, but quickly gave that up to practice their dark rituals no matter who it hurt.[citation needed]  The Highmountain tauren used to keep the harpies at bay with the

[Hammer of Khaz'goroth]—until it was stolen by the drogbar. Now, the harpies have been emboldened. The kobolds of Highmountain offer stolen and scavenged trinkets, oftentimes items that would be broken and worthless to anyone else, to the local harpies, and the harpies provide protection for their offerings of obedience.[12] 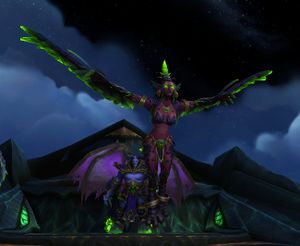 The Burning Legion steals the Idol of Aviana from the Shrine of Aviana on Mount Hyjal, cutting druids off from their

[Flight Form], and uses the idol to corrupt harpies with fel. The idol is retrieved by Thisalee Crow and the Archdruid of the Dreamgrove, and cleansed by the Cenarion Circle.[13] Fel-corrupted Deadwood Felcasters and Deadwood Featherblades can be found at Deadwood Landing on the Broken Shore, not far from Varian Wrynn's crashed airship. They carry a terrible contagion.[14]

The road to becoming a queen of a group of harpies is not a simple or easy one. A harpy must be willing to kill, betray and torment countless enemies and allies alike to attain and maintain the title for herself.[15]

Harpies seem to take interest in rare gems and ore, and actively trade their ear wax with kobold to attain them.[16] They love anything shiny.[17]

In Teldrassil, the harpies have sought to nest on the night elves' own homeland. Recently grown, the great tree is a perfect location for the Bloodfeather matriarchy who have already started laying eggs to increase the size of their tribe. The night elves are struggling to keep the number of harpies down, and give out bounties for Bloodfeather belts collected from dead harpies. They may be led by Fury Shelda.

In the Stonetalon Mountains, the tauren are having their own problems with the harpies. The Bloodfuries are the source of the increasing number of harpies in Kalimdor; they encroach upon all likes of life preventing the innocent from leaving their boundaries. Their leader, Bloodfury Ripper, is all but a queen to the Bloodfuries. She makes her home in the Charred Vale, close to Desolace where she is busy keeping out the tauren and night elves who are trying to regrow the forests. Their plumage is red and white.

Harpies located in the Coldwind Heights in the Dragonblight. They are led by Mistress of the Coldwind.

Dustwind harpies have settled down in the dry gulches and ravines of Durotar, much to the annoyance of the recently settled orcs. The harpies assault caravans on the road south of Orgrimmar, and have laid claim to a relatively large pocket of passages in the jagged rises just north of Razor Hill. They have blue and red plumage.

Harpies located in the Storm Peaks. They are led by Sirana Iceshriek.

More harpies nest in the lush tropical forest of Feralas. The Northspring harpies are among the most dangerous of the matriarchies, and can quickly slaughter the unwary traveler lost in the wilds. As with most of their habitats, the harpies in Feralas clash with the local tauren tribe, base in Camp Mojache. They have greenish skin and dark pink plumage. They are led by Edana Hatetalon.

Aggressive harpies can be found within a cave in the Thousand Needles. In the back of the den, they zealously guard their gathered foodstuffs. They are led by Grenka Bloodscreech.

The most powerful harpies in the world[citation needed]  reside in the Icewing Pass and the cave at the end of it. Their close proximity to Dun Baldar has rendered them dangerous enemies, and the Stormpike Guard employs those who are not on the battlefront to attack them. Though they are fierce and formidable enemies when you invade their territory, any traveler should be safe if he stays on the path while passing near the unfrozen lake south of Dun Baldar.

The harpies of the Windfury matriarchy inhabit the new home of their ancestral enemies, the tauren, and some can even be found in Thunder Bluff. They have nests both in the southern and the northern parts of the great grasslands, and constantly harass travelers journeying to and from Thunder Bluff, situated on the nearby mesa. Their plumage is blue and white. They may be led by Sister Hatelash.

Residing in the northern area of the Barrens in an area called Dry Hills, this group of harpies have been ravaging the Horde's caravan supplies. The lower sections of their group are led by so called lieutenants called Witchwing Slayers. They stand out from the rest by wearing rings. They, in turn, answer to the leader of the matriarchy, Serena Bloodfeather. She is the sister of a harpy named Bloodfeather, who was slain by Rexxar, and her attacks on the Horde are inspired by a sense of revenge. It seems she is assisted in her leadership by Sister Rathtalon. Their plumage is black.

The Wormwing harpies, led by Marion Wormwing, were a peaceful group that lived among the Druids of the Talon and other winged creatures at the Shrine of Aviana in Mount Hyjal. Now working with the Black dragonflight, they seek to destroy it all and even prevent Aviana's rebirth. 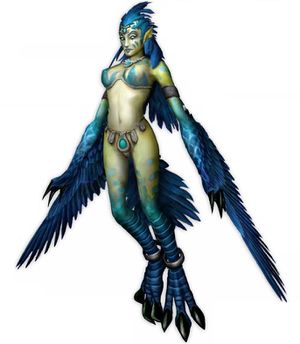 A harpy in the Monster Guide.

Vicious and predatory by nature, harpies are the bane of all other life in the areas were they take root. They have been raiding tauren settlements since time out of mind, and it can only be assumed that they are as much a plague on the quilboars and others. The only race rumored to have any peaceful relationship with the harpies are kobolds, who trade them scavenged tools and weapons for information and protection.[18] Harpies are an extremely unclean race. Their nests are obvious by the stench on the wind. They are immune to infection and other diseases that stem from rot or contamination. This immunity does not extend to the toxins of plants, animals, or any magical effects.[19]

No males have been reported, so (rumor has it) harpies breed with captive males of many species, though they prefer elves, orcs, and humans to either smaller or larger species.[20] The males of another species fills the role for a time, after which they become food for the nest. In lean times, harpies can lay unfertilized eggs that become female copies of the mother.[18]

Harpies also live in the canyons of Deadwind Pass and north of Stormwind City.[21]

The harpies (Anc. Greek: ἅρπυια/harpuia, "snatcher") are described as vile birds with the chest and head of women in many sources. They are not prominent figures in Greek mythology; they are a minor part of the high-profile tale of Jason and the Argonauts. They were bird-women who worked for the Olympians, and were assigned to punish the seer-King Phineas for revealing too much of the future. Every day, as Phineas would sit down to a great feast, the harpies would fly down and gobble up all the food. When Jason finally arrived, the sons of the North Wind (as a favor to Iris, a goddess who supported Jason) drove the harpies away to Crete, never to bother Phineas again. The physical appearance of Warcraft harpies is quite consistent with the original descriptions put forward by Ovid and Virgil. 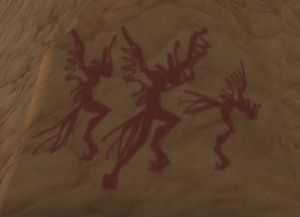 It is possible that quilboars worship harpies as there are rocks with pictures of winged humanoids in quilboar areas. Possibly, there could be some other connection between quilboars and harpies. It is possible that these are just normal pictures. This doodad is found in ogre lands as well.

No males of this race have ever been seen. Manual of Monsters blatantly says that there are no male harpies and that harpies breed though rape, while Monster Guide says that there are no reported males and that the raping is rumor. Males of the race are not necessarily necessary, though, and Manual of Monsters does mention parthenogenesis. Both sources, however have been declared non-canon.

Their use of shadow and void magic, and mentions of 'new masters' may imply that they've fallen victim to the corruption of the Old Gods since the death of G'Hanir.