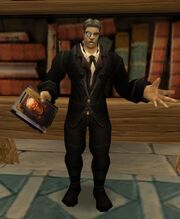 Harrison Jones in the Royal Library of Stormwind City. 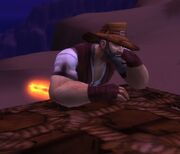 Harrison sporting a beard during the Assault in Uldum.

Harrison Jones is an archaeologist and explorer, much like his namesake. Initially a simple joke character, Jones has become a reoccurring character with added significance, particularly during the Uldum storyline. His companions often include Adarrah, Samir and Budd Nedreck.

Jones first appeared as a level 70 NPC located inside Zul'Aman. Upon entering Zul'Aman, the inner gate into the city was shut; speaking to Jones would cause him to don his hat (another Indy trademark), shout out and run over to the gong near the door. He and five players needed to hit the gong (a channelled effect, like summoning) until it stopped moving; shortly thereafter the gates would open, beginning the 20-minute timed event.

Though previously thought to have been killed by the sudden ambush of Amani trolls, Harrison Jones returned in Northrend. He can be found in the crypt of the Drakil'jin Ruins in the eastern Grizzly Hills. He decided to leave the place and asks the adventurer if they wanted to follow him. In the crypt, he freed Adarrah and defeated giant cobra Tecahuna. Once Harrison saves the adventurer, Jones disappears from sight.

Jones plays a larger role in Cataclysm, providing players with a series of quests in Uldum and also appearing in Stormwind Keep as the city's archaeology trainer.

One day, Explorer Mowi informs him about the Masters' Gate which Deathwing was trying to use as a weapon. Before deciding to go to Uldum, he sends an Alliance soldier to meet up with Adarrah.

Shortly after this, Harrison finds a mule and travels to Uldum on a Mule and is encountered at Khartut's Tomb, searching for the Coffer of the Promise. Moments before arming some explosives, pygmy shoots at Harrison's mule which forces the adventurer to hit a brazier and light the explosive. Terrified, Harrison and the adventurer jump into two nearby chests. After crushing into another pygmy, they ended up at the Obelisk of the Stars. To their luck, they discover titan tablet which tell him that the obelisk are what kept the land hidden. He also discovers that the way to recharge it is by using the

[Shaft of the Stars]. Going inside the Chamber of the Stars, he learns that the statues house four orbs and he decided to topple them.

Harrison then informs the adventurer to meet him in Ramkahen for the next step of his plan. They entered the Chamber of the Sun and activated it, then took flight on a plane. When Commander Schnottz told everything about his plan to the adventurer, Harrison came into the scene and tell Schnottz to beat it which meant we haven't seen the last of him. At the Obelisk of the Moon, Schnottz's men have already trend into the ruins to defeat the Guardian that protects it, but ultimately fails when the adventurer bombed the camp and killed the remaining men. Harrison arrives at the ruins and activates the obelisk, then he and the adventurer run towards the temple of Uldum. Unfortunately, Schnottz already won and found the treasure before they even got there. Surrounded by black dragons, Harrison and adventurer had been put in an impossible situation to get out of, until suddenly, the chest spoke. Someone was in there and used a orb of light to obliterate the black dragons and Schnottz himself.

Brann Bronzebeard's "two steps ahead of everyone as usual" strikes again and Harrison Jones and adventurer were relived. Harrison then told the adventurer to light up signal flares to be brought to the Coffer of Promise.

Jones can be briefly seen in the Silvershard Mines on a mine track heading north.

Jones is mentioned in passing by a Stormshield Guard in Ashran: "I hear that Harrison Jones still isn't any closer to finding that artifact." Examiner Rahm Flameheart and Illandria Belore of the Reliquary also discuss Harrison's mission, hoping to seize the artifact before he does.

Harrison is found on the main island excavating its ruins. He can be attacked as part of Horde's bonus objective in Stormshield Stronghold.

Jones appears in players' garrisons as of Patch 6.1.0 to aid them in recovering relics across Draenor. He becomes a follower for both Alliance and Horde players when his missions are complete.

He makes an appearance at the Maker's Ascent in Uldum during the Assault in Uldum along with several other members of the league.

Obelisk of the Stars questline

Obelisk of the Sun questline

A word to the wise, stranger, go back to wherever you're from.

This is no place for lighthearted adventurers. It'll chew up the likes of you and spit out your bones.

Thanks for the concern, but we intend to explore Zul'Aman.

Are you here to train in Archaeology?

On approach, Janric Moller, Lana Dubing and Darnella Winford stand in a semi-circle in front of Jones.
Archaeology is the search for fact. Not truth.
If it's truth you're interested in, Cuddy Nordlinger's Philosophy class is right down the hall.
Janric Moller laughs.
Lana Dubing laughs.
Darnella Winford laughs.
So forget any ideas you've got about lost cities, exotic travel and digging up the world.
Seventy percent of all archaeology is done in library. Research. Reading.
We cannot afford to take mythology at the face value.
Lana Dubing flutters her eyelashes at Harrison Jones.
Ahem! Well... ah, next week: "Tanaris." Starting with the excavation of Broken Pillar by Marvon Rivetseeker in Year 22.
I will be here doing research if anybody's got any problems for the next hour and a half.
The students wave goodbye and leave the library.

It's an a archaeologist's dream...

Obelisk of the Stars

I've been meaning to investigate this site.

Obelisk of the Sun

Dad always told me the big fellas hit hard, but that they're slow...

He may be related to Isabel Jones, Timothy Jones and Agent Jones.