The terrifying harvest golems are mechanical constructs programmed to hunt down and terminate the human inhabitants of Westfall. Though their origin is uncertain, some believe that only the wily goblins could have created these mechanical monstrosities. Others speculate that the Defias Brotherhood had the harvest golems built to scare off the local inhabitants of Westfall so that they could run their smuggling operations with greater impunity.[3] Whatever the case may be, the harvest golems have done their jobs well - eliciting terror in anyone foolish enough to roam the fallow fields of Westfall alone.[4]

The harvest golems were named by the dwarven explorer Brann Bronzebeard, who was attacked by one of the constructs while traveling through Westfall.[2]

Tiny harvesters collect weeds and small grains that the larger reapers may have missed.[5]

The farmers of Stormsong Valley also use harvest golems. Some of them seem to be enchanted rather than work purely through mechanical means.[6] 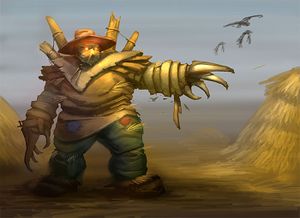 Artwork of a harvest golem.

Goblins created the first harvest golems to serve as guardians, setting the constructs to patrol the fields of Westfall. The goblins' first attempts were too effective; the golems killed so quickly and ruthlessly that no victims remained to spread tales of the horrifying guardians. Goblin tinkers thus hamstrung one of their creations just long enough for a survivor to spread the word. Within weeks, the fields of Westfall stood empty save for their silent, shambling caretakers. Harvest golems have since spread to other territories, leaving fear and mutilated corpses in their wake.

A harvest golem poses as a simple scarecrow long enough for its victims to enter partial charge range. It then charges, utilizes its backstab ability to rip the throat out of its nearest opponent. While mindless, a harvest golem possesses a degree of innate cunning a touch above that of most golems, modifying its tactics somewhat in response to its enemies' attacks. A harvest golem never retreats.

A harvest golem seems a simple scarecrow, but a crafter must lace its innards with sachets of expensive powders and ground herbs. In addition, the caster inscribes animating runes inside the golem's fabric body, which requires a rare ink made of powdered arcanite.[7]