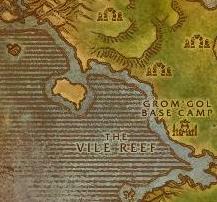 Location of the haunted isle, near Grom'Gol.

The haunted isle[1] is a medium-sized island near the coast of northern Stranglethorn Vale. Located a short distance south of Yojamba Isle and northwest of The Vile Reef. The haunted isle is not a proper subzone and is only tentatively called such by Baron Revilgaz.

The isle is infested with Lesser Water Elementals ranging from levels 35-37 and might be considered a good grinding zone for levels 37-39. The water elementals were summoned by a goblin wizard named Gazban, who currently wanders the island. He constantly fades and appears from the physical world, using the Stone of the Tides to manipulate the elementals. The isle has little places that are safe from the water elementals. They are scattered on the flat, sandy part of the island and on the hill on the eastern side of it.