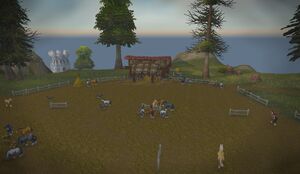 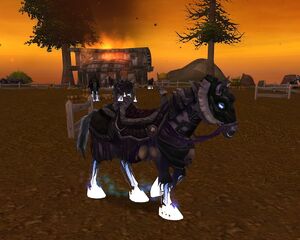 During Phase 2 of Scarlet Enclave

Death Knights are sent here during

[55] Grand Theft Palomino to steal a horse which will become their deathcharger in the follow up quest.

Stable Master Kitrik, a level 56 elite, patrols the stable's grounds, watching for any young death knights attempting to steal his horses. He should be avoided as he rides a mount and like most of the mounted riders in the Scarlet Enclave he does not dismount when attacking making it hard to escape. One should not attempt to steal a horse infront of him as he possesses an ability which will dismount you from the horse.

Upon the Second Phase of the Scarlet Enclave the Stables have been captured by the Scourge. All the Horses seem to have been transformed into Acherus Deathchargers. The Stables it's self is on fire, with several deathchargers inside not minding the blaze.

Outside of the Death Knight starting area the stables are abandoned, as with the rest of Havenshire.