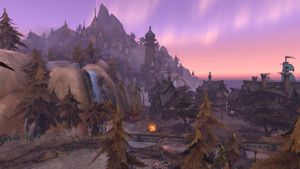 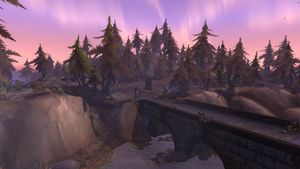 Havenswood is an Island Expedition location, home to an abandoned Gilnean settlement and castle.[1] It is inhabited by feral worgen, Old God minions, and dark necromancers.[2]

Any method of reaching the upper town appears to have been removed. Whatever remains of the inhabitants in the lower areas of the island have been transformed into worgen; led by several druid worgen women. The males appear to almost all be feral,[3] while the women seem to have some semblance of control.[4][5]

First announced at BlizzCon 2017, it was datamined in the earliest builds of Battle for Azeroth alpha, but it did not make it into the initial batch of island expeditions that went live. According to Jeremy Feasel, it ended up being one of the more complicated maps. He believed that it would be implemented sooner or later.[6] It was finally announced to be added in patch 8.1.0 alongside the vrykul island Jorundall.[1]

On the left, the original bridge can be seen in the unused 8.0. version of Havenswood. The live version, implemented in 8.1. is on the right, where the bridge is gone.

Havenswood underwent a significant redesign between its original showing at BlizzCon 2017 and when it was released. The upper town area was accessible in its original unused version, connected by a large rising bridge across cliff faces. The upper half of the bridge is still present, though it abruptly ends at a cliff face. The removal of the upper area may have been done to fix the complication issues that prevented it from being playable on launch and given that the upper area was only accessible through a single bridge that spanned across the island, it would have been difficult to move back and forth from the upper and lower areas during an expedition.

The region originally had a different color palette that was similar to Gilneas. It included a marshy area, but a large portion of the island was clean and forested with green pine trees. The live version uses a more washed out brown palette to give the entire island a swamp-look, and the green pine trees have been replaced. The island looked far more maintained, with fewer ruined structures and a canal system running down the mountain. The final version does not include the canal system and most of the buildings and stone walls are ruined instead, or damaged. A graveyard was once present on the lower half of the island next to a small settlement. In the live version, the settlement has been expanded, and the graveyard was replaced with more ruins.

Due to being overwhelmed by feral worgen and being a Gilnean settlement, Havenswood's island is probably located close to Gilneas and/or Silverpine Forest.