Hawkmaster Nurong is the Master of the Shado-Pan's Wu Kao discipline. He is found at two locations; Farwatch Overlook and Shado-Pan Garrison. He can assist you with Shado-Pan Daily Quests after completing the quest

[90] The Challenger's Ring: Hawkmaster Nurong. With the Thunder King's assault on Pandaria commencing, Nurong has joined Taran Zhu and the Shado-Pan at the Isle of Thunder.

Nurong is the author of

Trial of the Red Blossoms

Prior to the arrival of the Horde and the Alliance, Shado-Pan scouts had spotted several yaungol tribes moving east from the Townlong Steppes in a manner more akin to escape than aggression. Taran Zhu as the leader of the Shado-Pan, sent Nurong along with several members of the order to deliver a message to the council of Tillers in the Valley of the Four Winds. This mission, however, had an accidental interlude as the missive they carried was stolen by a young thief named Ten. Though Nurong got the thief by the end of the chase, Ten had already deceived his experienced subordinates onto a false trail, and was impressed by the youth's speed and quick wit. He offered Ten an option to undertake the Trial of the Red Blossoms to join the Shado-Pan order in lieu of punishment.

Three months later, after the mists had parted, the Trial of the Red Blossoms tested the initiates with a gauntlet of pain and rigor. Nurong as the master of Wu Kao Discipline, held the third part of the Trial: the Test of Spirit. Yet, some mantid assassins had secretly used the sha energy to defy and corrupt the Shado-Pan's sacred tradition. Nurong tracked the assassins from their hidden den near the outskirts of Firebough Nook and tortured them to reveal their conspiracy. Though he learned little from them, he still removed all their limbs and eventually decapitated them.

Nurong returned to Shado-Pan Monastery and declared that Ten, Pei-Ling and Heavy Chan could demonstrate their spirit if they would willingly take the oath to be Shado-Pan. He explained that the three young pandaren would be knowingly agreeing to face the sha again and again after having been marked for life, and would only feel increasing terror and fear with each new encounter: this is why only veterans are sent to face them. Yalia Sagewhisper of Omnia discipline disagreed, but she backed down with her face blank after Nurong warned her to not lecture him on his duties.

After the three accepted, Nurong rested on a bench after his long journey back and realized that he had been pickpocketed by Ten out of habit. He called Ten over and asked for his belongings back, which the acolyte, smiling, did so with his apologizes.[1] 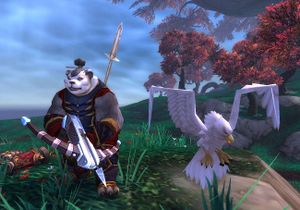 Nurong fights along side of his hawk, Whitefeather.

Later, Nurong led a small elite force at Farwatch Overlook against the mantid force coming from Dread Wastes, while Taran Zhu was seeking a skillful member for his hunt party for the Sha of Hatred. Nurong joined Taran and confronted the Sha in Sik'vess Lair, putting it to rest after so much death it had wrought in its roam. He then moved with the other Shado-pan masters to Shado-Pan Garrison to continue his duty against the mantid.

With the Thunder King's assault on Pandaria commencing, Nurong had joined the Shado-Pan Assault at the Isle of Thunder.

Nurong can be found on the Timeless Isle overlooking the Celestial Court with Taoshi.

When a monk adventurer goes after

[Sheilun, Staff of the Mists] at the Terrace of Endless Spring, Nurong is among the Shado-Pan who aid them in the battle against the Burning Legion.

Hawkmaster Nurong has the following abilities when aiding you in Shado-Pan Daily Quests.

[Snake Trap] at a certain distance from the target, usually where it is the least useful and tends to be in the path of patrolling mobs. He also tends to liberally use

[Disengage] when in melee (which happens a lot), which usually ends with him flying into the aggro range of surrounding mobs. Some players have expressed that the only good thing about choosing Hawkmaster Nurong is watching him quickly getting himself killed.