He Won't Even Miss It 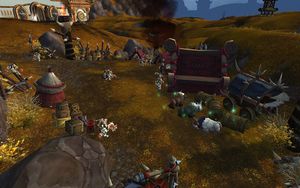 Yaks by the east entrance 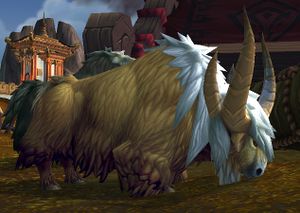 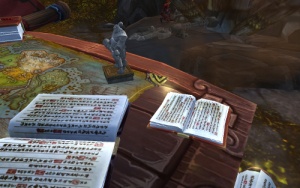 Create a distraction in the camp and steal the Weathered Journal.

I've noticed Garrosh and that Reliquary blood elf carrying around some sort of journal.

The journal is never more than a stone's throw away. It must be important!

If you can cause enough of a distraction, you may be able to swipe the journal off the table.

These yaks might just do the trick. Give one of 'em a tap and they'll do the rest.

Just be ready to move fast!

What did you find?

Phew! That was a close one! I never doubted you for a minute though.

Now let me take a look at that journal...

[90] Bugging Out before heading in to camp. And put on the

Walk in to camp from the east entrance, near the three Shaggy Longhorns. Wait until Nero moves south toward the pile of supplies and the southern entrance before moving in. Interact with one longhorn to spook it. Garrosh will run down to the bonfire and yell:

Garrosh Hellscream yells: Get those mangy beasts under control!

Then interact with the other two! Keep moving west and duck inside the big tent between the shaghorns and Garrosh's (former) location to bug it. On the table Garrosh was standing at is the

[Weathered Journal]. Further west is the small tent bug location. Wait there until Garrosh moves back to the table. Finally, head south to interact with the statue on the pile of supplies. Exit to the south and circle around back to Goottooth.

Every three minutes, Garrosh will start an interesting conversation with Reliquary member Delia Sunseeker, who is examining the smoldering remains of the yaungol totem. If you stand on the ridge above Delia, you'll be close enough to see it and not even have to wear the disguise.

In the one-hundred-and-seventieth year of the Thunder King's reign, the Korune spellweavers came to Lei Shen with their greatest creation.

A bell cast from the makers' flesh, shaped by stars' fire, and bound by the breath of darkest shadow. This bell, when rung, could shake the world and call to the heavens.

Taken to war, the bell's cacophonous tones stirred the hearts of Lei Shen's warriors. It fueled their hatred and anger, lending them strength on the field of battle. The bell's screaming voice struck fear and doubt into the hearts of the Emperor's enemies, sending them fleeing in his path.

Awed by its power, the Thunder King described the instrument as "the voice of the gods," and named it Shenqing, the Divine Bell.

[Operation: Shieldwall]. On completion of both: