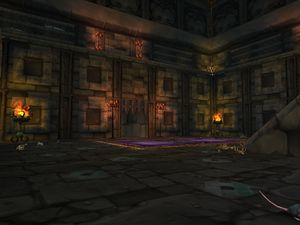 The Headmaster's Study is located deep within Scholomance. It is accessed from the Viewing Room via the eastern doorway. The study is surrounded by six antechambers over two levels accessed from the southern, eastern, and northern walls. Each of these rooms has one mini-boss, which must all be killed for the school's headmaster, Darkmaster Gandling to appear in his study. This is Scholomance's final boss.

The antechambers and their respective minibosses are as follows:

The entire area is now the arena for Darkmaster Gandling's new fight. It is mostly empty.