According to Laurna Morninglight, priests are the best healers.[6] 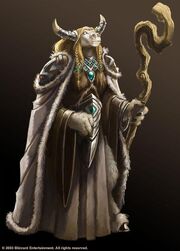 Healers are gifted and powerful spellcasters who draw power from nature, faith and the spirits. Regardless of the source of their magic, they do not deal with the tainted energies of the arcane. Instead, healers find their power in the world around them or in the spirits or Eternals they venerate. Healers are the heart of a community — and of an adventuring party. They use their powers to heal the wounded and bolster the spirits of those around them.

Healers form the core of all divine spellcasting organizations in Kalimdor and Eastern Kingdoms, from priests of the Holy Light to druids of the wild to shamans. Druids are present in the Alliance and the Horde, as it is a prevalent path among both night elves and tauren. Humans, dwarves and and high elves become priests of the Holy Light, while night elf priests honor Elune, the Moon Goddess. Rumors also tell of priests among jungle trolls and the Forsaken, but what powers they venerate are unknown. Shamans are common among orcs and tauren, and jungle trolls are now taking this path under the tutelage of their horde allies.

Druids are usually neutral in alignment, primarily concerned with keeping balance in nature and monitoring the wild for intrusions or disruptions in the natural order. Priests follow many faiths, but they tend toward good alignments throughout Azeroth; evil priests are rarely encountered, though the Scourge and Burning Legion certainly have their worshippers. Shamans take a pragmatic view of life and death, so they may be of varying alignments.

Druids are present in both the Alliance and the Horde, priests are most common in the Alliance, and shamans are encountered almost exclusively in the Horde.[7][8]

Not all healers use divine magic.[citation needed]  Some are known for using mundane materials such as potions, ointments, and bandages through alchemy, first aid or other means. These represent a healer profession, rather than a class.

Healers replaced the shamans of the Horde after many shamans became warlocks. The orcs of Draenor were known for their shamanistic culture. When they attacked the draenei, the elemental spirits began to leave them due to the imbalance in nature. The shamans became warlocks and many orcs were trained as healers to replace the healing abilities of the shamans. These healers used their knowledge of potions, ointments, and bandages to heal the wounds of the original Horde.[citation needed]

This may be a reference to a healer profession, rather than the healer class.

Various domains are accessible to healers depending on their path. Divine domains describe healer spells and help define divine spells.[9]